A month ago, my little town of Duvall on the east side of the Seattle area became an island when flood waters closed off both bridges, and the roads to Monroe to our north, and Carnation to our south, were underwater. I spent two days working from home, and it was no big deal. This is a pic of the lower bridge that I cross every day on my way into Microsoft. 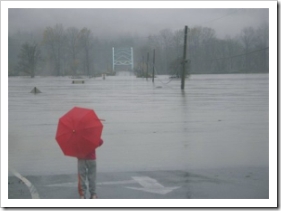 This time around, however, it was not so pleasant. Last night at around 6pm our power was returned, which was just 2 hours shy of 6 days without electricity. About 1/3 of Duvall is into their 7th day. We were one of the lucky homes — we have a gas range and fireplace, and we also had hot water. Temperatures dropped down to the low 30’s each night, so our wood and tiles floors were extremely cold, but overall we did just fine without a generator. The most difficult part was having school out, and the kids home all day. My wife is now officially sick of every board game we own. 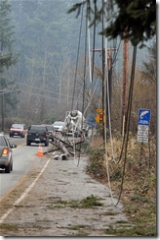 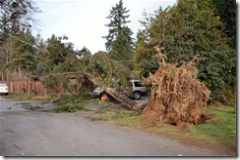 The amount of damage done by this wind storm was amazing. Thousands of trees down, over 750,000 people without power for some amount of time. Driving to Bothell on Saturday, I had to make two detours off of Woodinville-Duvall road (before it was ultimately closed), and saw downed trees every block or so, either resting on the power lines, or on the ground after having gone right through the power lines. For the amount of damage done, I have to commend the crews at PSE for working around the clock to clean things up.