I want my car in an Xbox game 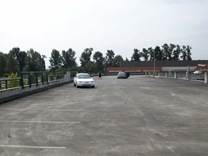 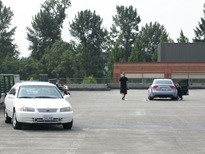 So lately I’ve been parking up on the top of the parking garage, far away from all other human beings — not because I drive a brand new and expensive vehicle and fear getting a scratch or ding, but because I’m trying to walk more. Over the past few weeks, I noticed a bunch of chalk lines on the ground numbered 1 through 15 or so, and wondered what was up. Then one day, mid-afternoon, upon returning to my car to head up to the main campus, I came across a couple guys taking photos of some sleek new sports car.

“We’re taking photos for a new game,” they replied.

Apparently, they were using the chalk lines to orient/scale their pictures. And that began my gentle plea to include my car in whatever game they were creating. But for some reason, they just haven’t been interested. “But the 1999 Camry is a darn sexy car,” I cajoled. They weren’t biting.

But every time I see them up there, I ask. “You could add some secret sauce, like rocket engines below the spoiler, or side-mounted laser guns.” Nope, nothing.

“This could be the cheat car that looks average, but secretly goes the fastest or has the best handling.” Zip.

What is wrong with those people?