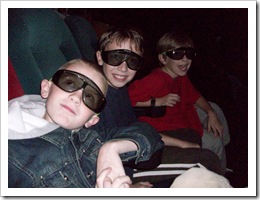 My third oldest, Nicholas, had his 10th birthday last week (on the 18th), and in lieu of a party with friends from school, he wanted to go to the Pacific Science Museum

with his best friend Andy, tour through the exhibits, and then go to one of the Imax

films. While it was a bit wet outside (shocker), we had a blast, and ended up seeing the 3-D version of Three Flies in Space, or whatever that thing was called. The movie was so-so, but hanging out with

Nick, Andy and my youngest son, Josh, was a lot of fun. Of course, sign me up anytime to go do something fun instead of staying at home and working down a list of house and yard projects.

One of the highlights of the trip was playing checkers on a giant board with coloured pylons. I crushed Nick and Andy. I completely dominate children under the age of 12 in just about everything I attempt. I’m thinking about adding that to my resume, just in case.