While I have not yet read Paul Krugman's latest revision to his 1999 bestseller The Return of Depression Economics  — and based on his politics, will likely disagree with many of his positions — I decided to attend the MSPAC luncheon today with Mr. Krugman as the guest speaker to hear his thoughts on the nation's economic woes and what he thinks needs to happen to turn things around. The man DID earn himself a Nobel Prize for economics, so chances were he would have an interesting perspective.

Just to clarify: my intent here is not to provide a book report, nor is it to give a complete breakdown of the event, point-by-point. I'm just using the blog to document the event for my own memory, and share some observations. 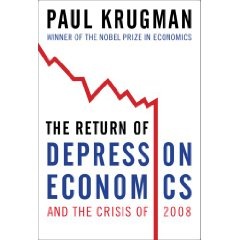 So here is my 30-second synopsis of the event: While the mainstream media is already hailing the current economy as the worst ever, Krugman stated that — at this point — this is not as bad as we experienced in the early 80's as far as overall wealth lost. However, when all is said and done, it likely will be worse due to the kinds of problems we are having (financial institutions, personal credit, housing, government debt), which will lead to more severe, longer-term issues. In a normal recessionary cycle, the slump lays the groundwork for the recovery by forcing individuals and businesses to learn from their mistakes, to focus on efficiency, to create better design, new business models, etc. The primary problem with this economic cycle is the government's inability to get credit flowing as it has in the past. Everyone is trying to raise capital at the same time – which devalues everything even further, causing a downward spiral. Instead of learning from our mistakes, the government steps in and prints more money, in some ways rewarding companies for their mistakes, and we're setting a bad precedent. However, he pointed out that doing nothing runs the risk of making things worse, creating an even more severe slump that goes on and on. Krugman believes the $800B package currently being discussed by legislators (as of this evening, it passed congress and now goes to the senate) does not go far enough, and we need to spend more – on the right things [that's where I get frightened]. He says he's most worried that our nation's leaders will follow Charles Kindleberger's law, which states that, given the choice between two policies, people will follow both half-heartedly.

As a final shot, someone asked him where he invests his money lately. The audience had a good laugh. All in all, I enjoyed the experience, but I just do not agree with some of his conclusions. I need to read the book before I say more and try to represent his ideas, but, generally speaking, I am vehemently opposed to spending our way out of this economic downturn by funding things that do not provide tangible assets for the nation. I am all for things like infrastructure (roads, bridges, fiber optic networks, and so forth), and am against bailing out private businesses. But that's me.

Thank you MSPAC for my free copy of the book, and thanks Mr. Krugman for the autograph.