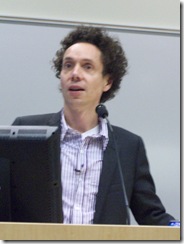 I am a huge fan of the various speaker events that come to Microsoft campus, and attend all that I can. When I received an invitation to attend the Microsoft Research speaker’s series with Malcolm Gladwell, I signed up quickly and showed up early to Building 99 the morning of the event to ensure that I got a good seat (thank you wireless connection for keeping me productive!). I ended up in the second row, right in front of the podium, as you can see from the attached pictures.

When Mr. Gladwell’s previous book was released, Blink, I became an instant fan of his detailed research, his ideas and perspectives on how decisions are made, and most of all his engaging and thought-provoking storytelling.  At my previous company, I even handed out copies to my team and explored with them ways that we could modify the company’s practices, and our own team culture, to become better at recognizing and acting on innovative ideas. On a road trip back from California in early January, I was excited to learn that my brother-in-law Dave had brought along his copy of Gladwell’s latest book, Outliers. We spent the entire trek back from the Bay Area listening to a Mr. Gladwell’s narration, occasionally pausing the text (via Dave’s Zune, by the way) to discuss what we had heard, to posit our own theories, and to try and apply these new ideas to our own work environments here at Microsoft. Sadly, the miles flew by, and we didn’t quite finish the book — but I was able to finish it off via hard copy once back in Redmond.

But Outliers is not what I want to write about. Yes, the book drove the thought process, but it’s the dialog that has happened outside of the book that continues to keep me thinking about Gladwell’s ideas. Let me first say that I do not agree with all of his conclusions, but the underlying premise of the book — that we owe much of who we are and what we become to our genealogical and hereditary beginnings — certainly rings true. But go read the book if you’re interested in that topic. What I want to talk about here is corporate innovation.

Mr. Gladwell opened his presentation by telling the audience that the most pressing topic on his mind was something that came to him after finishing his book, and that had he been able, he would have included it as a chapter. His idea was the capitalization of innovation, or, more specifically, our ability to capitalize on talent. To put this into context, he gave the example of Olympic-quality long distance runners. For the last century, the relative quality of athletes in developed nations was fairly equal. But something has changed over the last few decades — the quality and quantity of superior runners out of east-African countries has eclipsed that of the historically dominant countries. US, UK, German and Russian athletes, for example, have fought for decades for mastery with very little differentiation between them as far as training, talent, and results. But now? The difference between results of the leaders and the rest of the pack is enormous. The sport is now completely dominated by one geographic area (the last time the US medalled in the 10,000 Meter was 1964). Gladwell provided some insight into why this was happening, sharing with the audience that while there are hundreds or even thousands of prospective runners in the US, only a handful qualify at the level necessary to compete at the Olympics. However, in Ethiopia and Kenya, there are a few million youth who are running 10+ miles a day, every day. It has become a way of life for millions of youth. And with that large of a base to begin with, its no wonder that there are more qualified runners — and far superior runners — than almost every other country. It’s now part of their culture to run – something that will be difficult for other nations to overcome. Ethiopia and Kenya have both learned to capitalize on this outpouring of talent by offering various levels of training and competition, starting at early stages, to refine and develop their Olympians from a wide and deep pool of talent.

I believe we had just crossed the California border into Oregon when I came up with the following analogy: most companies are like a soccer team. They excel at identifying talented soccer players, and at convincing them to sign on to the team. With the season underway, the problem is that they have 120 people sitting on the bench. The coaches do their best to put the most skilled 11 players out on the field, but most don’t get a chance to play and really showcase their talents. With no chance to play, a few dozen give up and walk away. One coach says to another, “Well, they were clearly not good players, because they couldn’t stick it out. We’re better off without them.” The problem is that the team still has 50 or 60 excellent players sitting on the bench, with no clear understanding of the talent they have — or whether the 11 players out on the field are even the best players.

The epiphany I had out on the road, and which tied back to Gladwell’s talk, was that there seems to be a “capitalization threshold” – and finding that threshold was critical to talent capitalization. Expanding on my analogy, the capacity of the coaches to identify and utilize the talent on their team needs to be expanded (develop multiple tiers, expand coaching staff, double length of pre-season to further identify skills and specialization), and the recruiters, simply put, need to raise the bar on finding talent (better understand weaknesses on team and identifying players who can add those strengths, become more picky). The recruiting team needs to keep a sufficient flow of talent coming, so as not to let a future star go unidentified, but the coaches also need to develop a better model to keep their deep bench warm, spending more time understanding the unique strengths of each player so that they can tap into those strengths when needed. That is the capitalization threshold — the balance of resourcing talent against your talent utilization.

I suspect I’ll write more on the topic in the future, because here I am a month later, still thinking about the topic. For those interested in hearing more from Malcolm Gladwell on the topic of talent capitalization, here’s a video I grabbed from the Idea Blog: