It’s Been a Football Weekend

I am the first to reply. So there we are on a Thursday night in downtown Seattle, watching a close to capacity (if not capacity) crowd cheering on the Seahawks in what turns out to be a complete route of the Raiders. In truth, the score should be counted at 31-7, because it was at that point with less than 5 minutes to play that they had it clinched, and there was no way the Raiders could come back. The final was actually 31-21. If you’re interested, here’s a play-by-play. My crappy phone pics don’t do it justice, but thankfully Joel’s iPhone can take a

And to keep the football theme running, my youngest son, Josh, had his first official game over in Kenmore. Josh plays defensive line, and is really enjoying himself. He had a couple solid tackles, and

isn’t phased by his team’s loss, which is great. Glad to see that he is happy playing the game, and less about who wins or loses…although I’m sure he’ll be ecstatic when he has his first win. It was a tad nippy out there, but my wife and I were able to snuggle with our middle son, Nick, and watch from the front row of the stands.

And to top it all off, I was able to follow along on my mobile phone as my alma mater, #20 ranked BYU, was able to defeat #3 Oklahoma in their season opener. While I was never much of a football fan when I attended BYU from 86-89 (I did have season tickets for the 86-97 season), the addition of Coach Bronco Mendenhall has got me excited again about Cougar football, and I think I’ll follow them this year. I might even buy a BYU sweatshirt to replace the one I picked up in 1990. Who knows. Seeing how my daughter will likely attend BYU next year, I should probably stock up. 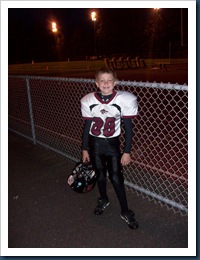