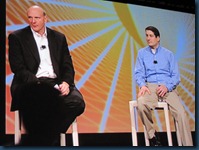 I’ve been so caught up in reading about other’s antics at the SharePoint conference 2009 that I’ve neglected updating my own site. Ah, so much happening this month, so little time to sit and reflect. In short, I have joined the team at

echoTechnology, located in downtown Seattle, and so each day has been a deep drink from the fire hose. And then this past Saturday morning I kept the good times rolling by attending the SharePoint

Saturday Redmond event at the Microsoft Conference Center. All I need to do now to keep this vibe going is attend one or two major conferences a month….

Most changes in SharePoint are on the administrative side, including almost 500 Powershell commandlets, a redesign of

the Central Admin UI, and the ability to recover from an unattached content db. I enjoyed sessions on VisualStudio extensibility, InfoPath and Access Services, and the guy who presented on mashup using the various new services and OOTB web parts in SharePoint 2010. Very cool stuff.

The sold-out event was fantastic, from the sessions and personal networking, to the 80’s beach party with breakdancers and Huey Lewis and the News, to getting tricked into singing in front of 1500+ people in a Rock Band competition (my band ‘Unhandled Exceptions’ came in 4th out of 8 with our rendition of the Talking Heads ‘Psycho Killer’). Most memorable night? People watching at Club XS as guests of Neudesic CEO, Parsa Rohani and the owner of the MGM Grand, followed by a poorly planned (but totally necessary) 3am search for Area 51 with @joeloleson, @danlewisnet, @ericharlan, and @mattbremer. I got maybe 3 hours sleep that night.

Going forward, I am excited to be back in the world of SharePoint, which is what drew me away from California and toward the Puget Sound 5 years ago, and which continues to grow and amaze the business world (Microsoft’s fastest-growing product, ever). With echoTechnology, I am able to wear multiple hats, and hope to be a very visible member of the SharePoint community. We’ll be launching a new blog, you can follow us on Twitter @echo4sharepoint (individually, I’ll still be @buckleyplanet), and you can join our FaceBook fan page here.