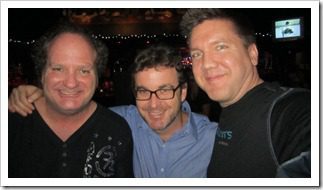 I am amazed at how quickly this year has flown by. This time last year I was doing multiple demos each day of our newly launched migration platform (Davinci Migrator for SharePoint 2010) and getting ready to launch  handful of videos as part of a new interview series with SharePoint experts and MVPs from around the world called The One Thing. As of this weekend, the total count of videos created for this series is 135, which could grow by a couple more before I disappear for 2 weeks for a much needed family vacation of Christmas.

presented at 17 SharePoint Saturday events this year. Yes, I know that is insane. I didn’t set out to reach that marker, and I don’t “plan” to equal it in 2012. but in my role as Evangelist at Axceler – and with my passion for pulling together community events – it just worked out to be a busy year of SPS activity.

SPSUTAH was an opportunity to yet again break new ground as I have helped do in Los Angeles, San Francisco East Bay, Sacramento, and Bend, and expand the SPS brand across the western US. And it was

an opportunity to work with my good friend Joel Oleson and the Utah SPUG President, Josef Nielsen, to bring more SharePoint to the Wasatch front (Salt Lake and Utah counties). We found an excellent venue in the Salt Lake City community College Miller Conference Center in Sandy, and had a very energetic roster of speakers, with SharePoint MVP Liam Cleary from SusQTech (Washington DC) as our keynote. I presented my session 11 Strategic Considerations for SharePoint Migrations, and worked with Joel and Josef, and many speakers and volunteers to pull together a #ShareSki event at Solitude, a fabulous speaker dinner (with massive quantities of Brazilian BBQ), and #SharePint after the event. Everyone pitched in to keep registration moving, and attendees engaged. The sponsor support was overwhelming, with a couple last minute adds allowing us to take a second trip to the store to purchase raffle prizes.

We gave away 5 XBox360’s, folks, as well as flat screen TVs, video cameras, printers, and a grand prize of the first FULL season of Fresh Prince of Bel Air. That guy was ecstatic – almost as much as the UofU fan who received the BYU travel mug. To cap off the event, we took some folks on a detailed tour of the Christmas lights at Temple Square. Overall, a great inaugural event, and we’re already discussing dates for next year (and a possible 6-month rotation).

Leaving Utah, I took a red eye Sunday night to Boston to visit Axceler headquarters in Woburn, MA (#TheWoo) for a couple days before heading south to NYC to present at the SPUG on the following:

I was joined at the event by Gail Shlansky, Axceler’s Director of Product Management,

and our sales team for the region, Andrew Duplin and Nick Harvey. After a day of customer visits and attempting to get some work done with a less-than-stellar hotel wi-fi connection, I made my way south again, this time to warmer climates.

SharePoint Saturday South Florida was my 3rd SharePoint event in the state (SPSTampa and DevConnections Orlando were the others), and a great way to wrap up the year of travels (although, technically, I close out the year by presenting to my local Puget Sound SPUG later this week). Many of my good friends were also presenting, and it was a very relaxed atmosphere. I presented the sessions Looking Under the Hood: How Your Metadata Strategy Impacts Everything You Do and The Connection Between Metadata, Social, and Personal Productivity and had some excellent feedback and conversations with the audience during and following my sessions. In case you weren’t aware, metadata and social are two of my favorite topics, and I can get quite animated when I present. Hopefully people got some value out of participating.

Following the event, a sizeable crowd made their way to the Hard Rock casino and the Murphy’s Law Irish Pub for SharePint before breaking off to visit a local Jamaican deli for some authentic jerk pork, chicken, and oxtail. It was fantastic (thanks to Fabian for pointing us there!).Thank you to Michael Hinckley, David Griffiths, and the rest of the organizing team

for inviting me to participate and for your hospitality. Looking forward to next year’s event.

What’s on the agenda for 2012? Great question. So much opportunity, and I hope to be able to continue “seeding” these events across the west, helping identify local leaders to establish their own annual events, and lending my experience to get their inaugural events up and running. SharePoint Saturday activities on my radar so far include:

Other locations high on my list of priorities are Houston, UK, Vancouver, and at least one of the Florida events. I suspect 2012 will be just as busy as 2011, but I need to prioritize these events and my participation. To be honest, I’d rather focus on these events and the community rather than the large trade shows, so that may be how I balance life and travel next year. We’ll see.