My Adventure in Israel 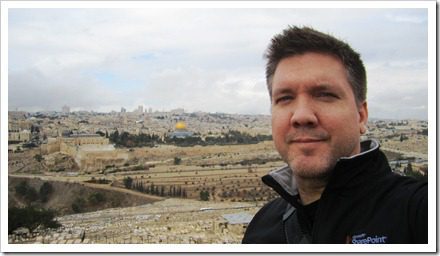 When you tell people that you are an evangelist for a software company and that you travel the country and the world speaking at events and meeting with customers, partners, and members of the community to talk technology, they think its all fun – like an extended vacation with a little work sprinkled in there. Hardly. It’s a good job, to be sure, but most of my trips are literally airport to hotel to event location back to hotel then back to airport. And while on the long flights (during which I can’t sleep, no matter how long the flight) I am doing a whole lot of writing. Once in a while, I am able to take a look around the destination, wandering the streets of Berlin for an evening, or taking a couple hours to walk around downtown Sydney. On a rare occasion, I may have a weekend overlap where I am able to take some personal time to do some exploring.

Last year, I was able to visit Prague in-between visits to Berlin and London, and I was able to work remotely (yes, still worked) from Scotland where I stayed with friends for a couple days before flying home. This year has been a sprint, but in March I was able to explore the north island of New Zealand on the weekend in-between SharePoint Conferences in Australia and New Zealand (where I got to hike Mount Doom), and on my most recent European expedition, I took a couple days off to visit Israel.

It’s a lot cheaper to fly to and from Israel from London that Seattle. The plan was to meet up with my brother-in-law David, who works for Microsoft and manages a development team in Tel Aviv. I’d explore Tel Aviv for a day, meeting up with him in the afternoon, and then together we’d explore Jerusalem for a full day before an early morning flight home the third day. So I booked my flight and took two days off from work. Non-refundable flights, of course. And then David’s trip to Tel Aviv was cancelled. And so there I was, flying into Israel, alone for almost 3 days to explore on my own.

Security in London took over two hours, but they were very respectful. My SharePoint Saturday NYC backpack was not cleared to fly, so its contents were sent to Israel in a box (the bag later cleared, and was sent to my hotel 2 days later). Since I was alone, I decided to simplify my plans and only stay in Jerusalem. I figured I’d come back in a year or two and check out an expanded area when I had travel companions (this turned out to be a good plan). I arrived at my hotel (the Jerusalem Inn, no less), walking distance from the Old City and Jaffa Gate, after 11pm, and had a hard time falling asleep out of excitement. I was ready to see the city.

Day 1 was spent entirely in the Old City, with tours of David’s Citadel, the Western Wall, and the Davidson Center with the archeological digs around the western and southern walls of the Temple Mount. I walked around the Jewish, Armenian, and Christian Quarters, with every taxi slowing down as they passed, honking to try and catch my attention. with headphones in and Muse, Duran Duran, Mutemath, and LCD Soundsystem in heavy rotation, I hardly noticed.

I enjoyed walking through the narrow alleys, exploring the markets and vendor stalls, and watching the local children interact and play in the passages between ancient structures. I spent about 3 hours or more in the citadel on a detailed tour. The guide was a woman with a thick New York accent and attitude to match that could have been the long-lost sister of my Axceler peer, Gail Shlansky (so much so that I took a picture, and have suggested to Gail that DNA testing take place). The highlight of

the day, however, was my solitary exploration of the western and southern walls, with the ruins of the Robinson Arch (the ancient stairway on the south-west corner, named after the archeologist who uncovered its remnants) that they believe is where Christ climbed when he drove out the money changers. And the steps

leading to the Temple Mount were incredible, with layers of walls and buildings, passageways, and bathing pools for purification (before entering the Temple Mount) have been uncovered. I love that stuff.

On Day 2, I walked clockwise around the Old City, visiting Golgotha, with the distinctive skull hill and the garden tomb, then made my way over to the Temple Mount entrance, up

Al Mujahideen Road and through the Lion Gate, where I chatted with the Israeli soldiers guarding the entrance (non-Muslims can only enter for a couple hours each Sunday), and then walked down the hill (along the Kidron Valley) to Gethsemane and the

church standing on the site. I walked up the path to the Mount of Olives, which skirts alongside a massive Jewish cemetery that covers the mount, reaching the top and spending an hour or so just staring out across the valley to the Temple Mount, the Old City, and the surrounding view. It was amazing. I couldn’t believe I was standing there.

After a short break at a roadside stand where I talked with a local merchant and two of his sons, I walked back down the Kidron Valley and headed south past the Siloam Pillar (towers and caves cut into the Mount of Olives at the bottom of the valley), climbing up the the south-east corner of the Temple Mount, and then following the wall north, which weaves through

hundreds of Muslim gravesites. When I reached the Lion Gate again, I paused to watch the hundreds of people exiting the Temple Mount, then finally merged with the crowd and walked north and then west until I reached Herod’s Gate on the north. After wandering through the Muslim Quarter for a while, I made my way over to the Church of the Holy Sepulcher, where I was able to catch on video and pictures a ceremony inside, before exploring the church for about 90 minutes. At the end of the day, I made my way

back to the hotel, and then out to find some dinner. (Some advice – there are not a lot of restaurants open in downtown Jerusalem late on a Friday night, so plan ahead) I ended up finding a fantastic Korean restaurant, and then retired to my hotel for a 4am wakeup and taxi ride back to Tel Aviv.

Everyone had warned me that security leaving Israel is even more stringent than entering the country, but I was through in about 45 minutes – mostly because of mu decision to remain in Jerusalem, and not explore outside of Israeli-controlled areas. All in all, it was a wonderful experience, but I feel like I just scratched the surface. I hope to go back for a few more days next year, and visit Bethlehem, the Dead Sea, and even head north to visit Galilee, the ruins of Jericho, and some of the other historical sites. Until then, I’ll just enjoy the hundreds of photos I took. 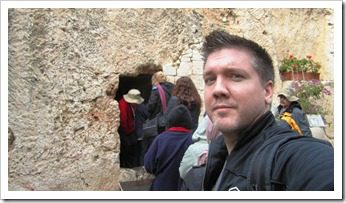