Q1 is Ramping Up 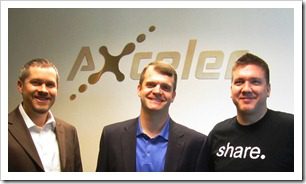 After a massive 2011 Q4 travel schedule followed by two weeks of vacation (I don’t think I’ve taken that long of a vacation in 10+ years), the year has been relatively quiet. After a great SharePoint Saturday event in Virginia Beach, I spent a week in Boston with the entire Axceler North American and Asia Pacific sales organizations, sharing with them a snapshot of evangelism activities in 2011 and our strategy for 2012. It was a great event, and I left feeling extremely energized, and ready for SharePoint Saturday Austin.

And then Seattle experienced “Snowpocalypse 2012” and I found myself working from home for a week while Puget Sound authorities debated the evils of throwing salt on the roads (it kills salmon, you know) or maybe investing in some snow removal equipment (just not a priority). That debate will rage on, and in the meantime Seattle residents will need to fend for themselves if snow reappears.

It seems strange to go from seventeen SharePoint Saturdays in 2011 to only two in Q1….and I couldn’t even get to the Austin event due to SeaTac’s inability to deal with a couple inches of snow. But I’ve been keeping busy. I have some big writing projects coming up over the next couple months, and some large events. Here’s where I’ll be in the remaining weeks of Q1:

While this may seem like a lot of activity to some, to me it feels like a calm before the storm. Q2 will once again be insane. The extra time at home is allowing me to work on several key pieces of content coming out before the end of the quarter, as well as more time working with the extended Axceler team to better connect with the SharePoint community and our customers and partners.Add to all that my regular posts to the Axceler blog, AIIM.org, CMSWire, and other portals, it’s a full docket. We had an amazing 2011, but we’re looking forward to an even better 2012.