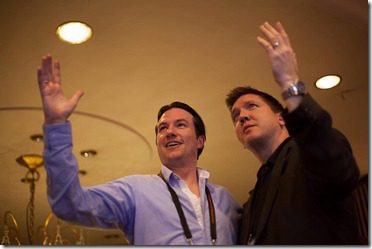 Most of you are aware of my video series TheOneThing, starring SharePoint MVPs, MCMs, and experts from around the world captured in one or two-minute long vignettes talking about whatever they want to talk about (pertaining to SharePoint). Each one starts out the same way, with me asking “What’s the one thing you want people to know about SharePoint…” and the experts sharing their thoughts. Off camera, many of those short videos would often lead to longer conversations. Sometimes even interesting

conversations (honestly, not always) that made me think “Hey, I wish I had captured that on video.” The problem was the packaged format of the OneThing series. They are short and sweet, not extended conversations.

Enter the “Digital Sack Lunch” series. The idea: grab a lunch, watch a couple videos. These are more in the range of 10 to 20-minutes, but also much more in-depth and comprehensive, giving me a chance to really dig in on some fascinating topics that largely center around SharePoint, but often delve into complementary technologies – or even into the Microsoft partner ecosystem itself, with explorations into the partner model and how to work with Microsoft. These are not “interviews” but “conversations” in which we explore ideas, joke around, and sometimes even leave questions unanswered.

The first installment of Digital Sack Lunch comes from the recent Australian SharePoint Conference (#AUSPC) which took place in beautiful Melbourne, where I met with Dan McPherson, co-founder and CEO of Zevenseas, and SharePoint Architect for SharePoint social computing company Attini. Dan and I have had many conversations about social inside of SharePoint – what it can do, what it lacks, and how his company Attini extends what is available out of the box. But more importantly, we have discussed at length the business needs and drivers for social, and this video attempts to capture some of that running dialog.

Future episodes include interviews with Kat Tillman from Microsoft on the upcoming Worldwide Partner Conference in Toronto, the growth of the Microsoft Partner Network, and the International Association of Microsoft Channel Partners (IAMCP); Owen Allen, VP from SharePoint ISV Pingar, as well as a full demo of the Pingar solution; Paul Culmsee, Managing Partner of Seven Sigma and author of the award-winning book The Heretics Guide to Best Practices; and Chris Beckett, one of a handful of SharePoint Certified Masters in the world.

Some great content coming soon, and I’m looking forward to having more great conversations this year (on camera this time).