The SharePoint Community on Yammer 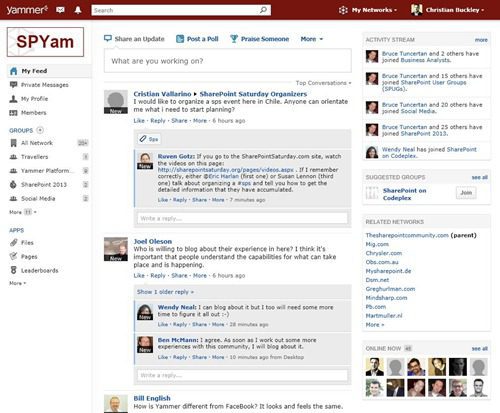 With the recent news of Microsoft’s $1.2 billion acquisition of the enterprise social networking tool Yammer, it was no surprise that members of the SharePoint community would quickly put together an external network using the tool. Led by SharePoint’s first admin, Joel Oleson, members of his collaboration platform team at the LDS Church (one of the largest SharePoint deployments in the world) including community “igniter” Noah Sparks, and a small circle of community members, the SPYam site has sprung to life over the past two days, with a constant stream of SharePoint experts and interested parties joining the ranks and building out their profiles.

What’s the point, you ask? In a recent blog post, Joel outlined the initiative as follows:

I invite early adopters to join me in kicking the tires, build out the infrastructure, create the right groups, and laying the foundation.  Yammer is a turn key solution, built in minutes, but what you’ll find with any social community what you really need is something to discuss and this will definitely come.  Let’s call this the pilot, it’s the beta.  We’ll help clear the way for the rest of the community. 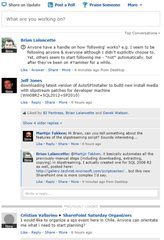 He outlines a list of 25 reasons why Yammer is the right platform for the collective thoughts of the SharePoint community, and is encouraging members to collaborate, share ideas, and be very vocal about what works and what doesn’t work – feedback to be provided to Microsoft and the SharePoint team as they begin the process of integrating this tool.

My own experience with Yammer has been limited due to sparse adoption (until recently) from my own organization. Like any social network, you need some degree of adoption for it to be useful…..and from the response so far, the SharePoint community is stepping up to participate in SPYam.

So what is included? If you’re new to Yammer, the first thing you’ll notice is the Facebook-like activity stream with threaded messages. Like Twitter, you can watch the steady stream of content as it is added in real-time, but like Facebook are not beholden to 140 characters. And like Twitter and Google+, you can consume information in filters, either by joining groups or by selecting a hashtag. For example, my default view is to see commentary from everyone that I follow, but I also joined a SharePoint Saturday group where I can read

content from a smaller circle of participants around a topic I am interested in. Or I can click on a #hashtag, which opens up every threaded conversation happening around that item, allowing me to very quickly zero in on a specific topic.

Why use Yammer over other platforms? Aside from the fact that Microsoft acquired the platform and will in some way integrate it into SharePoint, Office, or both, it is just better suited for the kind of social networking the community needs. Twitter is a public broadcast, with limits to how much you can share (again, 140 characters). Facebook is largely public, though you can make it somewhat secure. But it’s used more for personal conversation and networking, rather than business and technical collaboration. And there’s no integration path. Google+ just never caught on, and while you can share content with specific circles, its not exactly secure – and leaves a lot of room for user error in sharing sensitive data (like the Google employee who talked smack about Google and accidentally published his thoughts to the world instead of a small circle of friends). And then there’s the uncertainty of what Google is doing with your data.

Like any social networking platform, you need to find what tools work for your community. Salesforce Chatter is a great tool for sales and operations teams who spend a good portion of their days on the platform…..but is utterly useless to everyone else. Frankly, Yammer has only just become useful for me this week – not because its lacking in features, but its been lacking in fellow team and community members. Thanks to Joel and his team, there has been a spark in the community. We’ll kick the tires a bit, figure out what works and what doesn’t, and hopefully find a fit for Yammer going forward. And as Microsoft figures out their integration path, I’m sure we’ll see the story of Yammer and SharePoint weave more closely together, making the story even more compelling.

If you’re interested in participating in the experiment, you can request an invitation here.