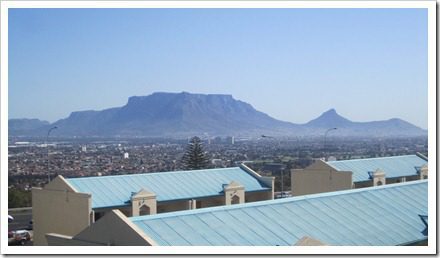 I kissed my wife goodbye on Wednesday afternoon, and a short flight or two later, rolled into Cape Town, South Africa (early Friday morning) feeling perky and ready to take on the world! If only there was a font for sarcasm. Maybe I’ll start using hashtags. #sarcasm #jetlag #middleseatfor11hourflight

This was my second trip to South Africa, which is a rapidly growing market for Axceler, and SharePoint, in general. And, of course, its always great to hang out with regional leaders like Veronique Palmer (another SharePoint MVP), Alistair Pugin, Bradley Geldenhuys, and others – who were joined by the likes

My session was a bit out of place in the IT Pro lineup following Seb’s session on PowerShell (about which I am writing an article for CMSWire). I presented my very popular ‘10 Best SharePoint Features You’ve Never Used (But Should)’ which is more of a power user topic, but did receive some great questions from the audience on how to extend a couple of them. Which reminds me – I need to put together a longer post one of these days with my ideas for additional automation of the conditional routing capability in Document Center. Good stuff. That one feature probably inspires more note taking than any other item on my list. Look it up, folks. It’s a nice tool for the tool belt. I’m just saying.

And I wouldn’t be me without getting caught up in one or two (or three or four) long, drawn out discussions on governance and end user adoption, since people are really waking up to the fact that most organizations do an incredibly poor job of planning for them. Ah, topics for another time.

Following the event, I was able to realize a dream of mine

(since February of this year) to pet a live cheetah. It’s one of those things that got started back in the spring leading up to SPS Johannesburg. Somebody showed me a picture of a woman at an animal refuge with her arms wrapped around a cheetah,

and it somehow got stuck in my head that I needed to do the same. And thus was born the hash tag you’ll often see, if you follow me @buckleyplanet, of #huggingcheetahs. Early Sunday (well, not THAT early because Alistair needed his beauty rest after a late SharePint) Seb, Alistair, Jim Bob, Veronique, Tracey (that’s right — Tracy van der Schyff, rumored to be the ex-wife of Jon Anderson, former lead singer of progressive rock band Yes) and I found our way to an animal training facility with two 4.5 month old female cheetahs – and we got to pet them. It rocked.

As I was sitting and thinking about my most SharePoint Saturday activities, I realized that decision at the end of last year to do fewer of them has not exactly worked out. To date, I’ve spoken at Virginia Beach, Austin (well, almost. I was snowed in at the Seattle airport), Redmond (officially, this was an Office365 Saturday), Los Angeles, Belgium, Johannesburg, Silicon Valley, Orlando, Toronto, New York City, and now Cape Town. To wrap up this year, I’ll be presenting at Redmond, Bend,Tampa, Twin Cities, South Florida, and the UK. And in addition to speaking, I was also an organizer for Redmond (o365) and Silicon Valley, and am on the organizing committees for Redmond (SharePoint), Bend, and Sacramento (but won’t be attending this one – as its at the same time as Tampa). Whew!

The jetlag is creeping back in. I think I’ll get some sleep, and jump back into the fray tomorrow morning. I’m here in London for a week to visit with my team, some customers, and for a Microsoft event. Good times.   #fearthepinkie