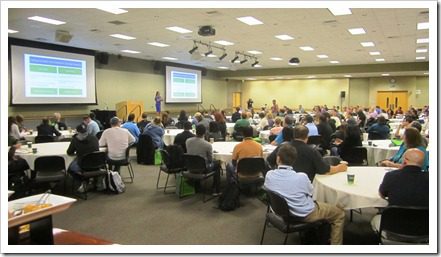 What a weekend. Another fantastic SharePoint Saturday event is in the history books, with almost 300 attending this past weekend’s SharePoint Saturday Redmond event held on Microsoft campus at the conference center. We had over 200 people there bright and early for the keynote, featuring Los Angeles SPUG co-founder-turned-Microsoft-employee Karuana Gatimu (@karuana) and Nishan DeSilva (@nishancdesilva) from Microsoft LCA (their legal business unit) sharing how they’ve deployed SharePoint and manage their enterprise content, already taking advantage of many of the new features within SharePoint 2013.

This was the third annual SPS event in Redmond, with these last two organized by myself, Chris Beckett (@sharepointbits), Owen Allen (@owenallen), Erica Toelle (@ericatoelle), and the fantastic board of the Puget Sound SharePoint User Group (PSSPUG) including Greg Frick, Bo Woronowicz, Michael Panciroli, Bryan Hart, and of course Owen. People kept commenting all day long at how well it was organized – which is a testament this team, which works very well together. It makes all the difference when you define roles early, and then get out of the way and let each person do his or her job. Its kind of my management mantra – tell me what needs to be done, not how to do it. And then you hold people accountable for what they signed up for. Seems to be working out, with this being our second SPS but third event together (our last one was Office365saturday back in March) and organizing roles seem to work pretty well. 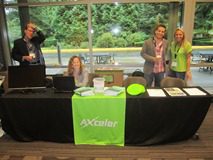 For those unfamiliar with the SPS model we follow, there is a speaker dinner held the night before (we went to Maggiano’s in Bellevue) where most events hand out speaker shirts (we went with speaker jackets this year), the main event where most SPS locations provide attendee shirts and other swag (we had a fantastic design and an AMAZING raffle), followed by a SharePint at a nearby waterhole (ours was held at Rock Bottom Brewery). My goal with every SharePoint Saturday I help organize is to keep things simple – the goal is not to recreate the big conferences, but to keep the focus on the content and attendees, to provide value to the sponsors, and give the speakers networking and promotional support. I love the simplicity of the model we’ve developed for Redmond. 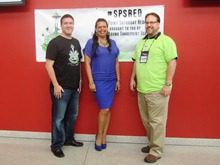 As the Platinum sponsor for this year’s event, the Axceler team was there in full force. Of course, the event just happened to coincide with planned product team meetings and some internal Microsoft customer sessions, so we were joined by Axceler’s new CTO John Puopolo (@johnpuopolo), Lenny Rosenfeld from our engineering team, and Gail Shlansky (@gailshlansky), our director of product management. Add to that our global VP of sales and business dev, Jeff Gore (@JG_Axceler), pacific northwest territory manager Melissa Vitti (@MelissaVitti), and fellow presenter and LA-based sales engineer Steve Goldberg (@iamgoldberg), it was a full house. In fact, John, Lenny and Gail are still hanging around Redmond for a couple days, mostly in Microsoft meetings. It’s good to have visitors to Redmond.

Both Steve and I had good showings for our sessions, with 45 to 50 attendees each. I presented my session ‘10 Best SharePoint Features You’ve Never Used (But Should)’ and Steve covered ‘Why do I care about SharePoint Metadata and Taxonomy?’ I would provide a link to Steve’s presentation, but at noon on the following Monday, he is reportedly still recovering from this weekend and has not yet uploaded his deck to SlideShare. Hmmm.

Following the SPS event and SharePint, the Axceler team made our way over to Daniel’s for steak with our partners over at Slalom consulting. It was a fantastic end to a great event. Steve may have had too much fun (see earlier inference). You can find pictures from the speaker dinner, event, and post-event SharePint here on Facebook.

Over the next few days, I hope to use this pulpit to address some of the questions and comments than came up during the event. I know there were a couple comments that came out of my session that I would like to expand upon, so if you participated, please drop me an email and let’s dig into your questions in more detail.