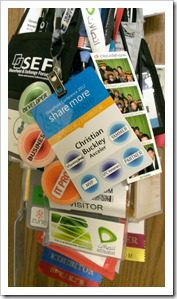 I’m sitting here in my office, hours away from the start of my Thanksgiving vacation, reflecting on the past week of drinking from the SharePoint fire hose at SPC12 in Las Vegas. I had some goals for the conference, but thought I’d report back on what actually took place, and make note of some key statistics, action items, and observations that came out of the event:

For all of those able to attend the SharePoint Conference last week, I hope you have a fun and productive week, and were able to get tremendous value out of the sessions and the many business connections made. I know I did, and am looking forward to following up on the new (and missed) connections.

My next major event is SharePoint Saturday UK in early December, followed by a 2-day partner meeting in the Midwest. I am home until then, spending much needed time off with the family, preparing for the holiday season. My thoughts and prayers are also with all of my friends in Israel and the surrounding area as the conflict there grows. Safe travels home, and hopefully things can be resolved soon.