The Wisdom, and Connectedness, of Crowds 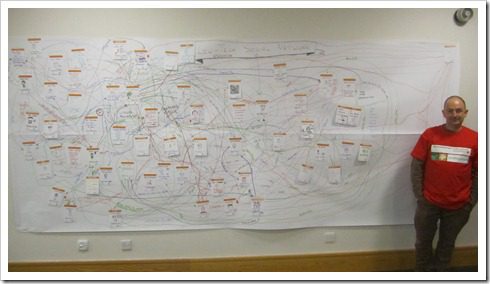 One fascinating thing about the SharePoint Saturday crowd is the willingness to try new things, to experiment with the model, and to test out new schedules, presentation methods (panels and lightning talks, for example), and to incorporate other social activities. Ant Clay (@soulsailor) came up with a novel idea at last weekend’s SharePoint Saturday UK in Nottingham, UK: to slap a couple long sheets of chart paper to the wall and allow people to add their profile and draw links to others on the wall. I thought the idea was brilliant – it became a talking point for many at the event, and provided yet another way for people to connect. You can read more about it in his latest post. And it got me thinking about how we might be able to extend the idea beyond a single event.

Some might look at this paper-based activity and say “It has served its purpose, but that’s it. It is what it is.” But I see a gap in what the current spate of social tools provide. And I see an opportunity. The idea is to take something like what Ant did at #SPSUK and transpose that to digital format, to create a simple interface that visually shows the links between people at a single event…..and possibly carry that data over to other events.

Of course, there are data visualizations of networks built from various social networks, with tools such as MentionMap and NetMiner that parse this data and spit out visual representations. Wikipedia.org includes a list of social network analysis tools and libraries, if you’re interested. But while most of these tools provide a presentation of data captured through the major social networks, what would be fantastic is a light-weight tool to help people quickly

connect at specific events. For those who may have participated in the most recent Microsoft Worldwide Partner Conference (WPC) in Toronto, there was an attempt to do something like this through the event registration process, but it was poorly executed, and did not include the kind of visualization that I’m talking about here. It was list-driven, not especially user-friendly, and kludgy.

What I am envisioning looks something like MentionMap (derived from your recent Twitter traffic) but with profile information, suggestions for connections, and possibly some kind of trending parameters so that I can see how often my path intersects with those with whom I am connected. Think about it: you attend a SharePoint Saturday and complete a profile (or link an existing profile to this new event as part of registration) from which you get a visual representation, a list of those you are not connected to (so that you can identify a missing connection link, or so that you can get an introduction), and suggestions for connecting. Maybe even tap into the social conversation, refining your conenction suggestions based on the frequency that prospective connections are talking or tweeting about a given topic. How cool would that be? 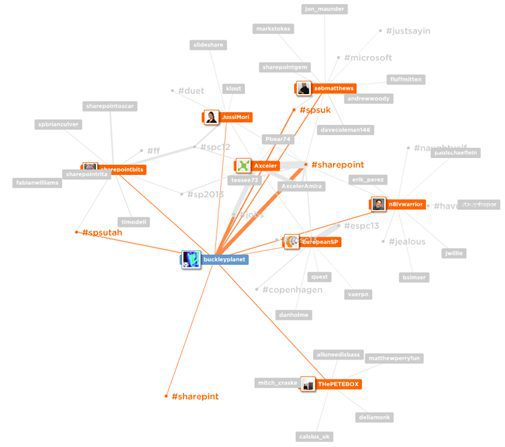 The revamped LinkedIn design does a better job of visualization between you and prospective connections, helping you quickly identify how well you match up with another

person. One key difference, however, would be that you do not have to be connected to them to be able to identify a connection. Building on what Ant did in his low-tech example, you would allow for people to draw links between themselves and others in the system, even if the connections are something simple as “Follow them on Twitter” or “Have heard of them.” Maybe you allow the recipient of a connection to “un-tag” themselves, but I don’t think this would happen often.

[The more I think about this, the more it feels like an old idea that Mike Watson and I had for social tools. (Hey Mike, maybe its time to re-look at the Tagspoon material)]

One idea that came out of reading the book The Wisdom of Crowds by James Surowiecki was that "Homogeneous groups are great at doing what they do well, but they are progressively less able to investigate alternatives. Or…they spend too much time exploiting and not enough time exploring."

My interpretation of this concept is that while people may be fascinated by this data and the connections provided, they will do little with it unless presented in a consumable format. For all of us that spent a day in Nottingham at a SharePoint event, only a quarter of us took the time to enter our information on Ant’s wall project. Throughout the day, many of us checked back to see who else had added their profiles, and when appropriate, made sure our own profiles were connected to these new additions. It was insightful, but unless there is some additional presentation of the data into a consumable format, the usefulness ends.

How different was Ant’s exercise than many of the networking or management tools that we use? Once the novelty wears off, where do we go from there? As with so many social activities, the power is in the data that they capture – and yet few consumer-focused social tools have managed to figure out the ROI for the presentation of this data. Fascinating stuff…