The Need to Separate Social from Marketing 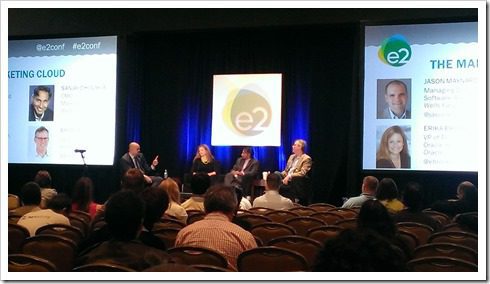 I just returned from Boston and the E2 Conference (formerly known as Enterprise 2.0), a new event under the brand that focused entirely on the category of social computing technologies. I’ve been meaning to attend one of the annual e2conf events in Santa Clara, CA, but they always seem to take place the same week as major SharePoint events, as with last fall’s SharePoint Conference in Las Vegas. It’s always interesting to attend an event with so many non-SharePoint vendors and customers to get a perspective on what people are looking for, what pains they’re experiencing, and what innovation is happening on the other side of the fence.

Overall, Microsoft is on the innovative edge of social with the acquisition of Yammer last year. Nobody “owns” the space, but momentum is clearly on Microsoft’s side, as far as platforms go. The real message for me, I think, was summarized by a brief presentation at lunch by Yammer customer success manager Matt Ontell (@mattontell) – its not about the technology, but about supporting the changing nature of business.

Where structured collaboration has failed, it has largely failed because the owners and operators of these massively expensive and expansive ECM and collaboration platforms lost sight of what the business was trying to accomplish – to connect people, to share ideas, to tap into the collective expertise of our employees. I was looking through my notes on the flight back to Seattle last night, and noticed that I had captured a number of statements from across a dozen presentations with a theme that, I think, illustrates some of the confusion about the business value of social:

For me, one of the highlights of the conference was the Wednesday morning keynote when Yammer co-founder and GM of Engineering, Adam Pisoni (@yammeradam) talked about the transformational change that the Yammer acquisition has brought to Microsoft. While I may not agree with all of the Yammer/Microsoft messaging – especially the kool-aide-drinker response that all ills can be healed by moving to Yammer now — I did appreciate Adam sharing some insight into what has been happening inside Microsoft over the past year (the one-year anniversary is next week, btw), and the transformational changes that are impacting not only their product roadmap, but their development methodologies. And those impacts are not being felt because of the technology – that was his point: it’s not about the technology. The point is that through the technology, communication has opened up and innovative ideas are flowing more freely. THAT is what Yammer has done to Microsoft, according to Pisoni.

And THAT is what social has the capability of driving within every other enterprise. But providing the tools to capture the sentiment and dialog of your business is only half of the equation – the other half is listening, and then taking action on what you hear.

There’s a reason that Yammer culture is so strong – it works. They used their own software to improve their software and strengthen their company culture – a culture that was developed when they had 10 employees, and which is now permeating Microsoft’s 100,000 employees.

Of course, I’m also a pragmatist. I see into the future and I believe in the vision of the socially-enabled enterprise, but I’m also keenly aware of the reality of what it takes to get there. It will take years to update entrenched systems, to transform years of process and structure, and to change the direction of governmental regulations that inhibit cloud-based data sharing. I am not so naïve to think that we’ll all move to the cloud in the next 2 to 3 years. It’s going to take longer than that….but it *will* happen.