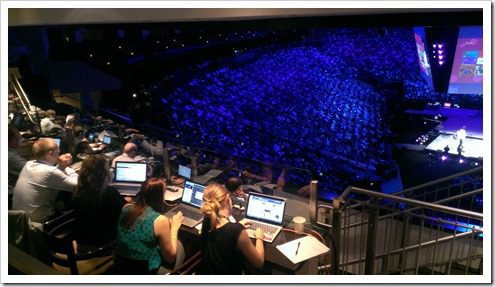 My thoughts on keynotes are that if you walk away with nothing more than a list of new products or new features, your overall message has failed. The point of a keynote is to paint with a broad brush, to set the tone for the coming year. So walking into the Day 1 keynotes of Microsoft’s Worldwide Partner Conference (www.digitalwpc.com), I knew there would be demos and excitement around new features and products, and maybe even some licensing changes – but that I would also walk out with some of Microsoft’s themes for the new fiscal year.

As a member of the partner community “social squad” with press access to the event, I sat with fellow squaders (squadees? squadi?) Jeff Shuey (@jshuey), Liza Sisler (@lizasisler), and Justin Pirie (@justinpirie) as well as SharePoint uber-star Jennifer Mason (@jennifermason) in the balcony, taking in the morning presentations, chatting and tweeting about what was interesting, what we though was falling flat, and sharing our thoughts about how Microsoft was positioning their messaging overall.

As always, there were products and features that impressed us. One of the standouts in my mind came from productivity improvements in Outlook. Email is already a mature platform, and rarely impresses with something new, but I applauded the simplicity of the new “Sweep” feature which allows you to remove all but the latest message in a long thread of content. The example used was of daily LivingSocial emails, where he used Sweep to delete all but the latest email in a long thread, instantly cleaning out his inbox. But Sweep also creates a governance policy going forward — as new messages come in, it automatically removes the last message from LivingSocial, ensuring you only have the latest/greatest in a series. I absolutely LOVE this new feature. On an almost daily basis I am hit with an email barrage internally where people are piling onto a single email thread, forcing me to delete dozens of messages when I only need to see one of them (the most recent).

And then there were some cool features that elicited more of an “its about time” response than “ooh yeah, gotta get me that” response. Miracast is a new technology that comes out of the box with Windows 8.1 and that, with a transmitting device plugged into your tv, allows you to wirelessly stream HD video and your full desktop to any tv. Cool stuff, and Apple has been doing it for years. I like the feature, but its about time.

So what was the underlying theme of the keynote? For me, there were three messages: “the power of the ecosystem,” “using windows across every device,” and “refining the user experience.” Microsoft CEO Steve Ballmer touched on all three themes repeatedly. While the messages merged a bit here and there, I interpreted them as follows:

“The power of the ecosystem” is about working with hardware partners to develop devices that unleash the power of Windows 8 to its fullest extent – devices that are not only touch-enabled (non-touch applications that also work in a touch medium), but touch-optimized (features designed specifically for Win8 touch gestures).

“Using Windows across every device” is about just that – selling the vision of tools and solutions that work across smartphones, personal computers, tablets, and embedded devices – all seamlessly. Several demos highlighted this fluid cross-device movement, using stories (i.e. use cases) to illustrate within real-world scenarios.

“Refining the user experience” was not as apparent of a theme, but from the start of the keynote, with the focus on the forthcoming Windows 8.1, which includes many “fixes” and enhancements to the Win8 release, there has clearly been some re-thinking of the customer experience in Redmond. It was a major focus on “productivity” with Windows enhancements discussed up front, as issue #1. While Windows 8 to 8.1 does not feel quite the same as the overhaul of Vista with Windows 7, I do think there are similarities.

I’m excited to dig a bit deeper into some of the Windows 8.1 messaging this week, and hear more from Microsoft specifically around SharePoint (little to nothing mentioned), Office365, and Yammer. But beyond the individual platforms, I do believe Microsoft’s future will be less about these individual platforms, and more about providing secure and consistent conversation and collaboration between business applications. So much of the messaging has been about the flow of content and conversation across applications, and across devices – part of Microsoft’s messaging around the “social fabric” between their solutions. Server & Tools President Satya Nadella announced a new Dynamics client built and optimized for Windows 8 and the touch experience, to be available in the fall, saying that the platform – and similar releases to follow – will completely change of how people interact with their business systems.