A Community Model for Service Excellence 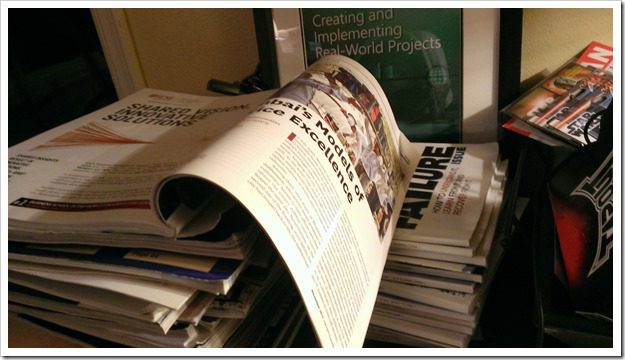 Sitting out in the open in my home office are piles of magazines, consisting mainly of Harvard Business Review, FastCompany, Wired, and various technology variants, almost all of them with dog-earned pages and handwritten notes, waiting to be transcribed and transformed into blog fodder. In fact, I was just chatting with my good friend and fellow blogger Jeff Shuey (@jshuey) about a personal goal to move through some of this backlog, publishing 14 articles in 4 days (just over 2 days to go, with 9 left!).

One of the articles in my backlog is from the November 2012 edition of HBR, entitled  Mumbai’s Models of Service Excellence in which author Stefan Thomke describes the entrepreneurial spirit and legendary reliability of the city’s 5,000+ dabbawalas who each and every day deliver more than 130,000 meals prepared by their customers, in their own homes, out to the customer’s office and then return the empty lunchboxes back to each customer’s home. Thomke shares that the dabbawalas are semiliterate workers who largely manage themselves, and yet have achieved a high level of performance with almost no overhead, not complex IT systems, and most without cell phones. Thomke writes:

“The dabbawalas service is legendary for its reliability. Since it was founded in 1890, it has endured famines, wars, monsoons, Hindu-Muslim riots, and a series of terrorist attacks. It has attracted worldwide attention and visits by Prince Charles, Richard Branson, and employees of Federal Express, a company renowned for its own mastery of logistics.”

After hearing about the success of this poorly educated, decentralized workforce performing with such reliability and predictability in an environment which can easily be labeled chaotic, Thomke traveled to Mumbai to conduct some research o the topic with the help of Harvard Business School’s India Research Center (IRC), where he learned all about the culture and history of the dabbawalas, interviewed workers and supervisors, and observed them in action. What he observed was that the dabbawalas have an overall system consisting of 4 pillars, all of which are, as he puts it, “perfectly aligned and mutually reinforcing.”

What stood out to me about this story was how much the dabbawala pillars matched what experts have found to be true in the successful creation, and sustained health, of communities – and specifically, communities built around social collaboration infrastructures.

Now, one important aspect of the dabbawalas success has been their need to make this successful. Personally, I think this is above and beyond what the author described as the group’s culture, because it has to do with people’s livelihoods — they push to succeed because they must succeed to survive. Aspects of that are part of the organizational culture, for sure, but I believe it has more to do with the individual drive of its members – akin to those power users or connector personalities who drive our collaborative structures and who hold our communities together. Without that drive, the pillars will fall away.

As Thomke points out, there are some valuable lessons to be learned here. One comment that stood out – and I completely agree with the author – is that a healthy community is constantly reviewing each of these pillars and making adjustments. He shares “When confronted with disappointing results, far too many companies mistakenly think that the remedy is to conduct a purge of employees and recruit some stars.”  But the dubbawalas have shown that by allowing the community to adjust the organization, management, organization, and culture of their community based on the changes and economic realities of their surroundings, they can make the right decisions to keep things moving forward. And since they’ve been around since 1890, they’re obviously doing something right.