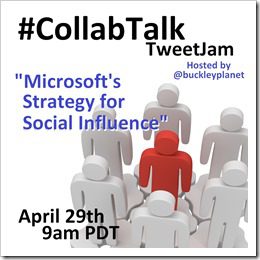 It’s time once again for my monthly #CollabTalk tweetjam scheduled for April 29th at 9am Pacific / 12pm Eastern focusing on the theme of “Microsoft’s Strategy for Social Influence” which is a supporting activity for a panel event I’ll be running at the European SharePoint Conference on this subject next month. I ran a tweetjam on a similar topic last summer, but wanted to touch on the topic once again because of the ESPC panel – and because we now have more details on Microsoft’s social strategy following the SharePoint Conference in Las Vegas last month. Specifically, Microsoft announced their new OfficeGraph technology, which plays a key role in the company’s efforts to identify, utilize, and measure social influence through various “listening” tools within the business and productivity platforms we use every day, like SharePoint, Outlook, Yammer, Dynamics CRM, and of course from our use of the internet to search, communicate and collaborate. It’s pretty simple – to identify social influence and do something with it, you need to track social activities….so OfficeGraph is a HUGE step in the right direction, and I’m pretty excited to see Microsoft innovate in this area.

If you’re new to the tweetjam model, basically its an hour-long public conversation held on Twitter and using a shared hashtag (or as @sebmatthews would call it, “a shared octothorpe metadata field”) which is #CollabTalk. You can use your Twitter platform of choice OR go over to http://twubs.com/CollabTalk which automatically appends each message with #CollabTalk, and has a nice feature that allows followers to actually slow the dialog down to a readable speed (it can fly by fairly quickly). The questions we will be discussing are listed below:

As always, we will have a panel of experts on hand to help seed the conversation – but anyone can jump in and participate. That’s the point – we want to encourage people to share their perspectives, so don’t be shy. Our panel this month will include:

I’ll add to this list of panelists as I confirm them in the next day or two, and am excited to once again have a lively debate. We’re also doing something slightly different this time around – we’ll have a number of our panelists live via Google Hangouts, allowing viewers yet another way to participate, watching us as we “simulcast” the tweetjam via video. I’m not sure how it’ll turn out, or if it will provide any additional value – but we’ll try anything once, and it should be fun!

Mark your calendars, tell your colleagues, and get involved!