Malcolm Gladwell and the Underdog Approach to Innovation

I came across an article in the October 2013 Costco Connection (you read it too, right?) on one of my favorite columnists and authors, Malcolm Gladwell, and thought I’d share some of his quotes on the ideas of following your own path, and breaking rules if necessary to do the right thing. 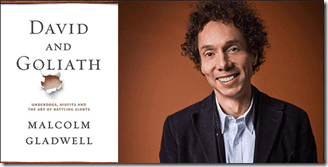 In the article To Agree or Not to Agree by Bryan Reesman, the author shares how Gladwell is the opposite of  disagreeable, the word Gladwell uses to describe many of the ‘underdogs’ chronicled in his new book — people who overcame perceived disadvantages to change their lives and the world. The word is not meant by Gladwell to be a stigma, but a way to identify those people who, through means, motivations, and even hubris, managed to make their mark in unusual and unorthodox ways.

“Doing something disagreeable is doing something that is frowned upon by your peers, that is offensive to your peers, and that requires you as a person to take extraordinary social risk. Sometimes that strays into things that are downright questionable. In Emil Freireich’s case (the doctor who used unconventional and even controversial means to battle childhood leukemia) he was breaking lots of rules, but his argument would’ve been the rules are dumb. In retrospect, he was right.

“He didn’t let those kind of considerations get in the way of what he knew had to be done, and I think that’s an incredibly disagreeable act and an incredibly heroic act at the same time. I think he’s an extraordinary figure.

“I never had any great desire to be well-known or to sell a lot of books. I’ve only ever wanted to do my own thing and all of this happened just as an accident. Maybe that’s paradoxically one of the reasons why I’ve done well. People sense that I’m doing things out of pure enjoyment. I’m not pandering to an audience or following a formula, I’m just writing about cool stuff that interests me, and people respond to that.”

If you think about innovation, and the success of recent startups and entrepreneurs, it rarely comes by following the rules – but by foraging a new path, and pursuing ideas and goals outside of the status quo. But as Gladwell suggests, its not about breaking the rules for the sake of breaking the rules: its more often than not about staying true to your personal goals and integrity, pursuing the solution to a problem or answering a need, and doing it regardless of what other people think.