The Maturity of SharePoint’s Social Story 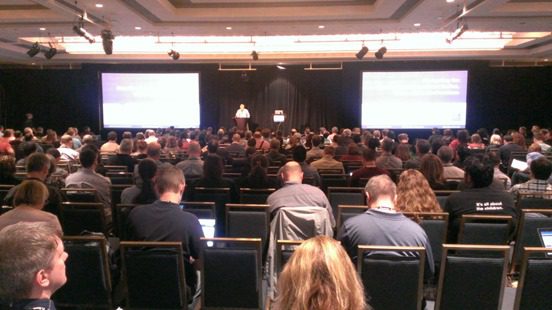 An expansion on an article first published on the SPTechWeb earlier this week:

I'm attending the European SharePoint Conference in Barcelona this week (#ESPC14), presenting a session on cloud and hybrid SharePoint adoption (a version of the presentation I gave at the SharePoint Conference in Las Vegas earlier this year), a session that doubles as a panel event on the topic of social influence, and finally am co-presenting with Microsoft's Mark Kashman (@mkashman) the Wednesday morning keynote on the topic of SharePoint's social roadmap. Similar to the SPTechCon event in San Francisco last month, I am very interested to review session feedback and attendee responses to my sessions as well as other social-related topics.

Following SPTechCon, I had a quick email exchange with organizer David Rubenstein over feedback from my sessions and the handful of other social sessions at the SPTechCon, with the goal of contrasting and comparing feedback. While the feedback was not too bad for my actual session, I've been seeing a trend in comments made by event participants there and elsewhere. Specifically, I have observed mixed feedback around Microsoft's posted social roadmap, with some people very passionate about where Microsoft is heading — others extremely negative about the impacts of that same roadmap to their current on premises environments. I've heard from other speakers with similarly mixed feedback fro their attendees, with David reporting much the same response in the general event feedback.

In Barcelona at ESPC14, Jussi Mori's (@jussimori) session on gamification at ESPC14 filled every seat, with standing room only in the back and sides of the room. For my keynote this morning with Microsoft's Mark Kashman (@mkashman), which covered Oslo, Office Graph and the new Groups capability, we also discussed options for hybrid and on prem SharePoint deployments, sharing examples and demos of on prem social solutions from within the partner ecosystem (www.beezy.net). The response to both sessions was fantastic…. and yet most conversations in the first two days with customers and fellow speakers showed very neutral or negative feelings toward Microsoft's current social messaging.

There is still much work to do to help people not just understand the business value of social, but to help them see how to get from their document-centric and email-centric business systems-thinking into a more social system. Based on the feedback from SPTechCon, David and I outlined some ideas based on the feedback we're receiving:

While most of the social content being presented at SPTechCon and other conferences is relatively new (and being new, will require some tweaking), my sense is that negative feedback on the topic generally has more to do with people's frustration over Microsoft's direction (and overly gung-ho Yammer messaging that doesn't seem to connect the dots for document-centric SharePoint-heavy organizations) than what is being shared within these sessions. In particular, people have voiced their frustration over Microsoft's focus on social innovation within the Office365 and Yammer platforms rather than providing more innovation for existing on prem customers.

Honestly, I think some people go into a session on SharePoint social expecting a "silver bullet" for on prem environments, and are disappointed (some even angry) to hear that their only path to a robust on prem social experience will be through 3rd party solution providers rather than out-of-the-box. There is a gap as of today — both in messaging and in the technology, between what is being pitched and what can be delivered. For example, swapping out your newsfeed and using the Yammer web part in 2010 (Yammer app in 2013) is not (yet) plug-and-play, and actually takes some fine tuning to get working properly. And once in place, its not a seamless user experience to point each web part to the right Yammer feed.

We are in the midst of a dramatic shift in the way that organizations collaborate, internally and externally. Social tools are not just a "nice to have" or bolt-on capability, but are quickly becoming fundamental to the way that individuals communicate, and teams collaborate. Many of our assumptions about how we collaborate — and even with how we've deployed SharePoint in the past — are being challenged, with much of our collaboration moving from document-centric models to conversation-centric social activities. With such a dramatic change will come churn. People will need to adjust, and this change will take time.

In a DigitalWPC article last summer, I quoted Yammer co-founder Adam Pisoni from the E2 Conference in June 2013, which took place in Boston:

Yammer co-founder and GM of Engineering, Adam Pisoni, addressed some of these questions from the audience during a morning keynote, answering that the underlying goals of the two platforms were different, with Yammer offering a more people-centric solution that is very different from the structured collaboration value proposition of SharePoint. Pisoni made it very clear that there would "never be an on premises version of Yammer" but that SharePoint would continue to support some social features for those customers who are not able to move to the cloud just yet. He told one audience member, "There are a lot of people on premises who cannot move off of (their on premises platform) very quickly, but it’s just a matter of time. The future is here, but it’s un-evenly distributed."

In messaging last year, and again in messaging at this year's SharePoint Conference in Las Vegas, Microsoft has made it clear that they will continue to innovate on SharePoint, but primarily through their work on Office365 and other online properties, with regular updates and versions being pushed down to the on prem environment through its traditional 2 to 3 year release cycle. Does this mean we will see more innovation in the social tools available through on prem? Yes, but to what extent, I'm not sure.

My advice for companies trying to figure out how to incorporate these new social models into existing SharePoint infrastructure investments is to be clear on your goals and your business requirements. If you have an on prem deployment and are not yet sure how social will fit within your plans, starting off with Yammer (in the cloud) is probably your right step forward. As you begin to see the value of the platform, you can consider swapping out your SharePoint newsfeed with the Yammer newsfeed, and then incorporating the Yammer app into your site templates. Understand that its not a turn-key solution, and will take time and effort to get working properly. Most importantly, however, understand that this is very much a cultural change in how your teams collaborate, not just a new set of features to bolt onto your existing platform.

Best Practice: always experiment first, understand the fit, and then build your plan.