Insight Into the Office365 Roadmap

Communication with Microsoft has always been hit or miss, as some product and marketing team members have been better than others at participating in the community. Having attended three MVP Summits in Redmond, let me assure you that improving communication has been a constant theme. And while Redmond can temporarily placate this feedback by telling people “We’re listening. Just hang on a little while longer,” at some point there needs to be tangible effort made. Enter the O365 Roadmap site and expansion of the IT Pro Network on Yammer into the Office365 Technical Network.

I’ve never been a big fan of forums – although, like most of you, they are one of the first places I go when searching for quick answers and examples of how others have solved problems. The problem has been the lack of a centralized place to get details about what is coming, what has just been delivered, and what has been delayed. Case in point: last fall there was some community displeasure voiced over a feature update that nobody knew about. When asked about it, a SharePoint product marketing person responded “But it was on my blog. Didn’t you see it?” Announcing an official product change or update through a personal blog is NOT the way to disseminate important information, but is a way to support, explain, or expand upon official update news. And I think Microsoft took the negative feedback from that experience, and similar experiences, and put forth something that really works well.

Announced yesterday, the Office365 Roadmap is a site that, quite simply, catalogs the features and changes that have been recently launched, will soon be rolling out, are currently in development, or that have been cancelled. Click to open one of these sections, and you’re met with a list of items which can expanded to see a brief description, thumbnail, and link to more information (most pointing over to TechNet, where you can rate, comment, or find other relevant links).

The site is both straight-forward and functional. Not much more to say on it, other than go take a look. Of course, this great communication tool will fail if Microsoft does not strive to keep it updated. Specifically, I’ll be watching the In Development section. What I’d hate to see is a disconnect between new features that are being discussed openly within the community and this site – if its being discussed, and especially if screen shots or even demos have been shown, it should show up on this list. If not, it will impact trust with the community, and diminish the authenticity of this site.

You can find a similar site and format for Yammer releases.

The other communication vehicle picking up a lot of steam is the Office365 Technical Network. The network initially launched under the IT Pro Network moniker with limited adoption, but then something clicked inside of Redmond, a quick name change was made, and clearly there is now some muscle being put behind the network. 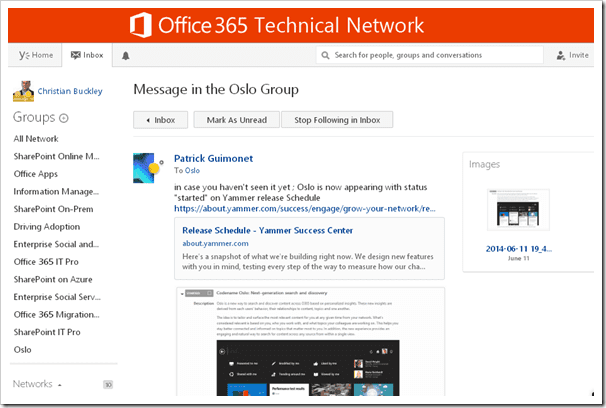 If you are a Developer or IT Pro, or want to get the inside track on what is happening within the technical side of the SharePoint and O365 community, then you need to join this Yammer network. Its open, so anyone can join – just request an invite.

It is critical that we, as a community, continue to provide direct (and indirect, through partners) feedback to Microsoft. They are listening, and we are seeing the rate of change increase. I’ve heard people suggest that there should be “one place for all product feedback” but this is just not realistic. there are different channels, different audiences. But that means you need to be a part of a few different networks to make sure your voice is heard. Don’t just post questions to a forum, or leave comments on TechNet. Find the relevant communities and join them. These two sites should be part of your regular information consumption, and should play a central role in your product feedback going forward.