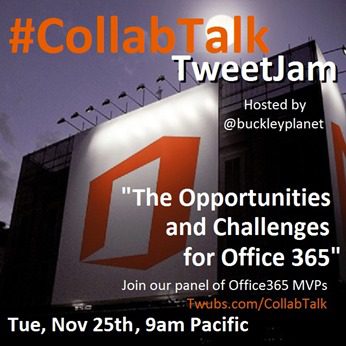 Office 365 has quickly displaced SharePoint as the fastest growing platform in Microsoft’s history, and is at the forefront of the company’s innovation strategy. With the rise of the Office 365 brand, the number of Office 365 MVPs is also on the rise, with most having a mix of backgrounds in SharePoint, Exchange, Lync, and various social platforms. Just in the past year, I am amazed at how many organizations – who previously claimed they had no plans to move to the cloud – are now anxiously embracing the Office 365 platform. And so I thought it was appropriate to put together a panel of Office 365 experts on Tuesday, November 25th at 9am Pacific to talk about this rapid adoption, and share their thoughts on the future of the platform – as well as the brands contained within (SharePoint, Exchange, Lync, and Yammer).

Beyond just discussing roadmap chatter, the goal of this tweetjam is to talk about opportunities and challenges that organizations face as they begin to move from on prem environments to the cloud, and as many of them make the transition from centralized, document-centric platforms to much more dynamic and personalized solutions that will take advantage of new features such as Delve, Groups, and inline social experiences within Office 365.

For those of you new to the concept, the discussion will be held via Twitter using the #CollabTalk hashtag, or you can go to our Twitter-based site at Twubs.com/collabtalk which allows you to follow along without the rest of the Twitter noise, and which also auto appends each tweet with the #CollabTalk hashtag so that all comments stay within the stream. Why Twitter? Because its public, and anyone can jump in. Yammer is great for targeted groups within your network, or within a defined user community, but Twitter is the right tool for reaching the broader public.

Within the hour, we’ll discuss several questions in detail. Anyone can participate – you can watch, answer, retweet, ask your own follow up questions, or strongly disagree. The point is to start a dialog, share ideas, and make connections. Here are the questions we plan to tackle re: Office 365:

Within the tweetjam, we’ll ask follow up questions and, based on responses from our panel and the audience, may take the conversation in one or two different directions. That’s the point. These questions are really just themes for the discussion. So if you’re looking for specific answers, just ask.

Our panel this month includes a number of Office365 MVPs and some folks from Microsoft, but, as always, anyone can join in on the discussion!

As a newly minted Office365 MVP (made the switch from SharePoint MVP as of October 1st) I am excited for this discussion and to share some of my thoughts on where the platform is going. We’re going to have great participation from Microsoft and the community, so please join us – and tell your friends and co-workers!