Back in mid-March, Julia White, general manager of the Office 365 team, shared in an Office Blogs post some of the details from the Convergence conference about the roadmap for Delve, and how Microsoft is focusing on “reimagining productivity to help people work in new and more connected ways.” It should come to no surprise to people to see new features appear at a fairly regular pace as Microsoft has made the shift from a 3 year waterfall development cycle to a much more rapid, iterative process where telemetry and analytics around how people are using the platforms and tools are driving much of the feature strategy. In Julia’s blog post, she talked specifically about some of the additions coming to Office 365 and the Delve experience. (Side note: as I was writing this, with the blog post open on a non-touch monitor to my left, I reached over to try and touch-scroll the article up. Yeah, it didn’t work, and I needed to use my mouse. How archaic.) Specifically, she called out the inclusion of Yammer feeds.

Why am I writing about this now, when Julia mentioned it a couple weeks back? Because it finally hit my Office 365 tenant. I’ve been waiting for Yammer to be added since Day 1, because so much of my daily workload happens around the Yammer platform – so it just makes sense that certain artifacts and documents being shared within Yammer should be surfaced within Delve. Now, some history: shortly after the Yammer acquisition a couple years back, I reached out to Christophe Fiessinger (@cfiessinger), Office 365 Product Manager and master of all things social, to ask about the Yammer add-on for the Chrome browser:

As a Chrome user, I had found this nifty little extension a few months earlier and had been using it extensively. How it works – as you navigate the interwebs, the tab sits on the right side of the browser window (only occasionally getting in the way), and when you come across something interesting that you’d like to share and discuss with your team, you click on the tab to open a Yammer conversation directly into your home network. 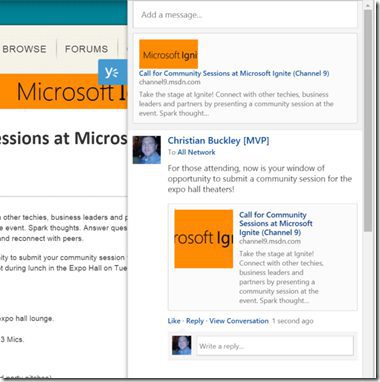 Even more powerful, however, is when you find something you want to talk about in Yammer, hit the tab, and find others already talking about that same link, allowing you to jump right into the existing threads. There used to be a floating number on the tab – indicating how many conversations or links existed to that page, but it was dropped from the add-in UI. 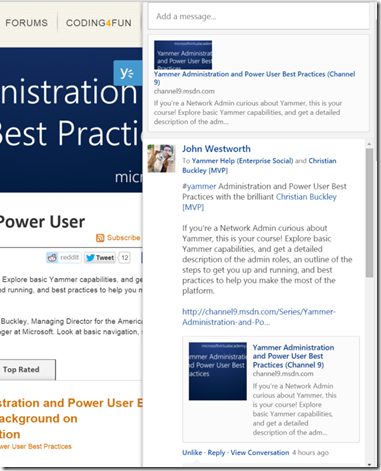 Now, going back to my query to Christophe, I asked him when we would see this same capability in IE, Firefox, or Safari, to which he replied that there were no current plans to expand the add-in. Not a big deal to me, as Chrome has been my primary browser for years. I did, however, become an advocate for this little tool. Why am I mentioning a Chrome extension in context to Delve? Because the new Yammer capability in Delve works in much the same way. First off, it is fantastic to now see all documents, files, presentations, and other artifacts surfaced within Delve. Check that one off the list. What I’d love to see next is a Delve card for relevant Yammer Groups and/or conversations. How powerful would that be? Relevant discussions — security trimmed, of course – being surfaced based on your activity? Add that to the list, please.

Similar to the Chrome extension, by clicking on the Yammer icon in the Delve card, the Yammer panel opens directly into the threaded message, allowing you to interact. Here’s how it looks: 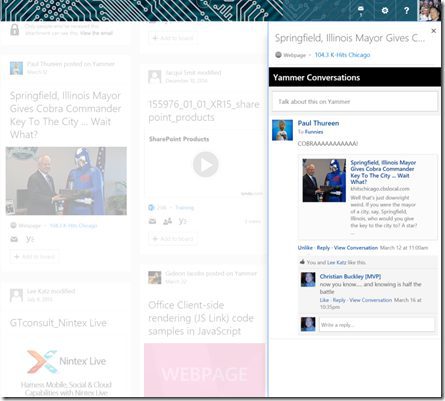 Think about this from a productivity standpoint: using the Office Graph, Delve is surfacing the content that is most relevant to you, your team, your project, your meeting schedule, your search history, and so forth, and then connecting you straight into the most recent conversations surrounding that content in Yammer.

There’s still much that needs to be done to help Delve reach enterprise readiness, in my mind, but I’m thrilled to see progress being made. Maybe we’ll see a “task” icon show up soon, allowing us to assign an action to a card, such as kicking off a workflow. Who knows.