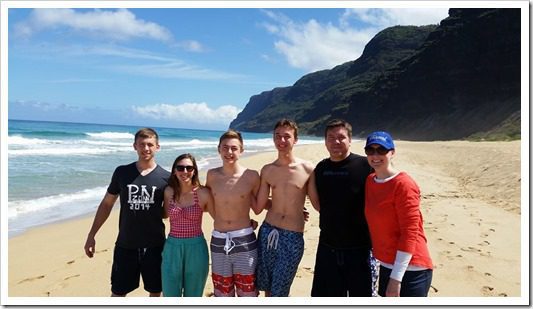 Another month, another content summary. Going to make this one quick as it is Sunday night, I’m sitting in my room at the Hard Rock Hotel in downtown Chicago, and Ignite begins tomorrow. Craig and Warren are over from South Africa, and the GTconsult team will be hitting the venue early to grab breakfast and a good seat in the hall for the morning keynotes. I am already working on a mid-keynote post, so stay tuned for that, and will be doing some live blogging for ITUnity (which I catch a bit of during BUILD, and is a great way to keep up as the content flies by).

While I still managed to produce a few items of content, my focus this past month was around family and business-building. The GTconsult team added another team member this past month, and a few more customers. May should be a great month as projects kick off. But more importantly, with my two oldest children returning from their church missions, the family escaped to Hawaii for a week, which was a much needed break. We made it to our favorite beach three times (Polihale) and had a wonderful time swimming in Queen’s Bath in Princeville. Very relaxing vacation, but at the same time, its good to be back and attending Ignite. And like all good vacations, I came home to a backlog of activity, including several webinars, another tweetjam, and the CollabTalk show on ITUnity.

In my writings, I was driving on a couple themes in April, but my topics felt like they jumped around a bit. Of course, if you were to pull back and look at the past 4 to 6 months, I think just about everything here would fall into standard patterns. But to lead off on this summary, two major activities were my first SharePointmag.com as a regular columnist, and a whitepaper created for Colligo. Proud of both, so hopefully you enjoy them. The Redmondmag.com article is something I have tho9ught about for a long time, and occasionally tried to articulate in presentations about the cycles of technology – and where I believe SharePoint sits within that cycle. And the Colligo whitepaper is a topic that I have written extensively on, but tried to encapsulate into 5 key areas:

A HUGE topic this past month was my preparation for Microsoft’s inaugural Ignite event here in Chicago. Excited to be here and see so many friends, and if you’re attending, you’ll find me in 3 sessions:

Another project I am involved in is Ignite Washington (no connection to Ignite in Chicago), which is an initiative to help  small to mid-sized businesses in Washington State to become digitally-ready. It’s a great initiative, and GTconsult is a proud sponsor. And I threw my latest LinkedIn post in there because its also kinda/sorta associated to the business topic.

Yes, I know – completely shocking that I would write on the topic of social collaboration. As I mentioned in last month’s summary, my final Microsoft Virtual Academy videos were posted to Channel 9 a day too late to include in last month’s update, and so roll to this month. You can also find the course – with all of the test questions – on the MVA site, as well. But I also found time to write about a couple of the announcements out from the product team, as well as interview Beezy founder and CEO Jordi Plana about where he thinks the opportunity is going with social.

Another event in April was the big news that Metalogix acquired MetaVis. I caught wind of this a few weeks before the deal was closed, and have mixed feelings about the deal. But from a partner standpoint, GTconsult worked with both companies, so it certainly simplifies things for us. At least now we don’t have to tiptoe around it, right? You’ll see more Metalogix-related content from me this month, as I am a judge for their Ignite Best of Breed awards, will be at their big party this week, and will be the MC for a sponsor panel webinar in a few weeks.

Finally, I wrote several other articles which I’ll throw under a broader category of “SharePoint Management” including a chapter in the now available book “Improve It!” organized by Mark Miller and the WebTrends team, and slides from two webinars – one that I conducted with Damon Tompkins, VP of Sales and Marketing at MetaVis/Metalogix, and the other with 10-year Sony Electronics veteran Melinda Morales, on her experience building out Sony’s governance strategy. The slides are almost entirely hers, and for those who didn’t see my tweets on the topic, Melinda has joined the GTconsult team in Bellevue. We’re excited to have her onboard!

Ok, I’m going to wrap this up and hit the sack. Big day tomorrow! Don’t miss Satya Nadella’s keynote at 9am CDT!