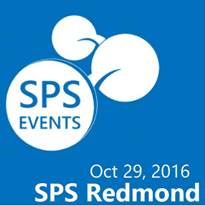 October was bittersweet. It was my final outing as SharePoint Saturday Redmond organizer, and I have now officially turned over the reigns. I’ve been involved for 7 years, but now that I have moved my family from Seattle to Salt Lake City, it doesn’t make sense for me to stay directly involved. Community events need to be run by the local community members if they are to have any “sticking power” and long-term success. I’m proud of the fact that I led the creation of SPS events in Redmond, Silicon Valley, Sacramento, East Bay (San Ramon), Los Angeles, Bend (Oregon), and Utah – and helped other teams around the world get their local events up and running. It all started back in 2009 when I attended my first event, and very quickly got tired of having to fly to the east coast to attend them. And here we are, 7 years later.

In case you missed the event, and would like to get more involved, I highly recommend you join the Puget Sound SharePoint Use Group (www.PSSPUG.org) and attend their November 17th meeting on Microsoft campus (new home!) where they’ll be talking about growing the SPUG and next year’s events. Get involved! And if you’re outside of the Seattle area and are wondering how to get involved, check out www.SPSevents.org for details about the nearest community event. I created a short Facebook video to thank everyone for helping me make these events so successful over the years, but once again I want to say thank you to Owen, Bo, Greg, and Karen from the PSSPUG board, and Erica, Melinda, Trevor, Eric, and Treb for making it all happen on the SPS organizing committee.

Here’s a link to our event site:

The other HUGE thing that happened this past month was the #CollabTalk tweetjam on the state of the community. Check out some of the stats, most of which were generated by John White and the team at #tyGraph via PowerBI:

The focus this past month was around the evolution of the SharePoint community, as many events and user groups are experiencing slow to negative growth – and its become a running dialogue in the community to share ideas on how to better serve the community. I think you will see more content and changing priorities for SPUGs and SPS events in the coming year as we adjust to the changing needs of SharePoint and Office 365 users around the world. I would love to hear your feedback! Check out the Storify post, which captures the entire hour-long Twitter conversation, and then leave your feedback on my relevant blog post.

The other big news was the announcement by Facebook of Workplace general availability. We’ve heard about it for more than a year, and have seen some much-publicized moves from SharePoint and other platforms to Workplace….and caught wind of some much less publicized moves back to Office 365. My opinion? Read below:

In preparation for my sessions at the European SharePoint Conference later this month in Vienna, Austria, and specifically my keynote with Benjamin Niaulin from Sharegate, I write some posts on the importance of culture to how you approach collaboration and communication in your org:

Of course, there was my actual session at SPS Redmond, conducted by myself and Melinda Morales from 3Sharp, all of which was streamed live on Facebook:

I also led a webinar this past month on the topic of mobility, and the trends that are rapidly changing how information workers collaborate:

If you follow me on Twitter or Facebook, then you are well aware of the spam I was pushing out the past month around the fact that my company, Beezy, is a finalist for two awards at this year’s European SharePoint Awards: Most Innovative Cloud Solution, and Best Intranet/Extranet Solution. In case you did NOT see these, check out the award submissions that I put together:

And finally, I did manage to squeak out some posts on the broader Beezy messaging, as well as wordsmythe a couple news tidbits through our PR channel:

To kick things off in November, I am still camped out here in the Redmond area, and am currently writing from within Building 40 on campus. I am here all week, and then participating in the annual MVP Summit next week, also on campus. From there, I will be driving back to Utah….to catch my flight to Vienna and ESPC. Hope to see you there!