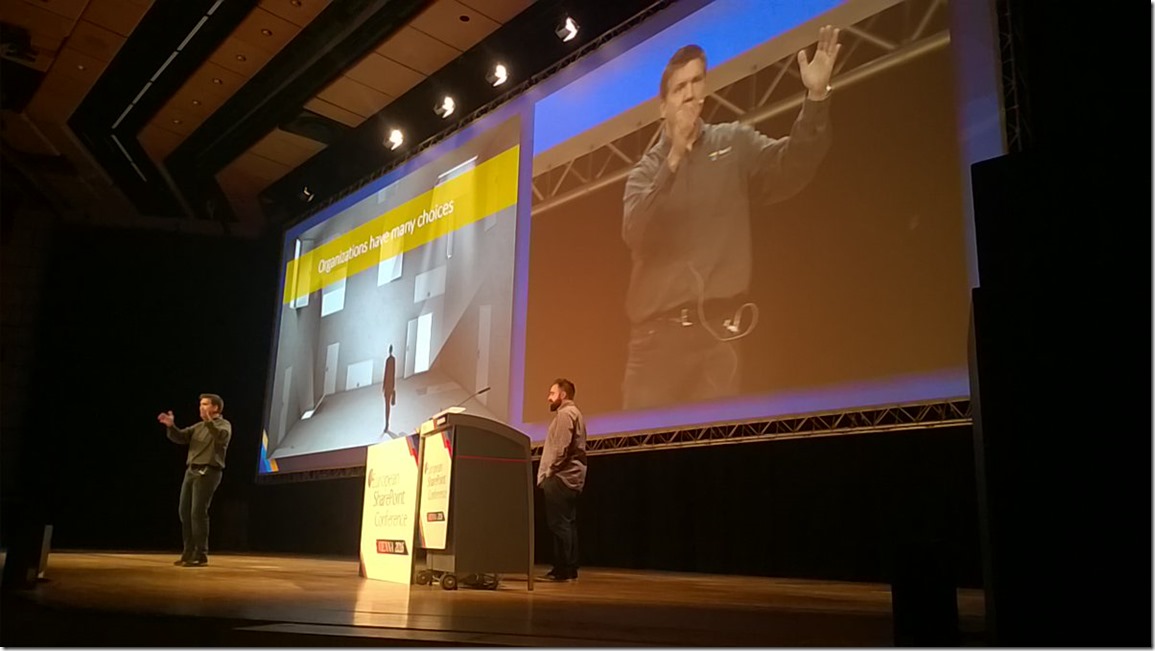 Oh, what a year! One of the benefits of going through this monthly exercise of recapping last month’s content and activities is that it is fairly easy to the ‘Monthly Summary’ category in the tag cloud and pull up all (or most of, anyway) my activities for past months. And if you haven’t noticed, each item on this list is ready to be cut-and-pasted into a tweet, if you’re feeling so inclined. What’s different this month is that I’m including Twitter IDs for each source, rather than just including the name, which makes them even more tweet-relevant. Not sure why it took me so long to do that.

After an epic November, which included my 6th MVP Summit on Microsoft’s campus with a week on the road, working from my sister’s house in Snohomish, to the European SharePoint Conference in Vienna, Austria where I was able to keynote with my good friend Benjamin Niaulin (@bniaulin) and join my Beezy team on stage to take home our second award in 2 years, followed by Thanksgiving in a new house with an army of relatives, and wrapped up with my 26th wedding anniversary. Yeah, that was a busy November.

And then there was December. Quiet time, and the beginning of the snowy season here in the Salt Lake valley. As you can see from the activities listed below, there was some decent output — but much of what I worked on was behind the scenes at Beezy, finishing off some new sales and marketing materials, and updating others. And I took a few days off, which was nice. Oh, and I hosted one of the biggest #CollabTalk tweetjams of the year. More on that in a minute.

In January, TONS happening. Can’t get into all of it just yet, as some stuff is not yet ready for prime time. But what I can say is that I am expanding my community research and writing activities in a BIG way. In fact, I am closing out sponsorships of a research project in conjunction with the Marriott School of Management at Brigham Young University, which will run through the spring. More on that in the coming weeks.

Ok, as for content, I wrapped up 2016 the way I’ve wrapped up the last few year — with a couple ‘Year in Review’ blog posts:

If you missed the end of year CollabTalk TweetJam, you missed a lot. Well, the Storify summary below includes an archive of almost every tweet that was sent during this monthly one-hour session. What made this event special was that we had over 50 confirmed panelists, and reached almost 6.4 million social impressions, which is outstanding. Thanks again to Beezy and tyGraph for sponsoring this event. It’s only going to get bigger in 2017. If you want to know what other people think about the future of SharePoint, OneDrive, and Office 365, check out the blog and summary. But you really should also check out the amazing Twitter stats compiled by the tyGraph team to get a true sense of the interest and impact of each tweetjam question, and what resonated with the participants:

Within the mainstream of my monthly writings you’ll find a collection of broad topics, from collaboration and adoption to implementation best practices. The most-read article of the month was, by far, the “Still Bullish” post, so be sure to check that one out for sure:

We reached another milestone in the almost year-long ‘Measuring Collaboration Success’ initiative with the release of the second survey results, which focused on the metrics used to track the success of collaboration (primarily SharePoint). We also launched the third and final survey, this one focused on the best practices for implementation success — because you can have the right definition and goals, and the right metrics to measure your progress, but then fail at your implementation. Check out the survey and share your feedback. It’s anonymous, and it helps others in the community to learn:

Microsoft made an announcement in December that they were changing the name of the Worldwide Partner Conference (#WPC17) to Microsoft Inspire…..which is a great name. Well, Nintex sure likes it, seeing how they’ve had their InspireX conference for a bit. Er…well….that’s unfortunate. But Microsoft came out with a promo video to get people jazzed about the annual event, this year taking place back in Washington DC. What’s more, I make a couple cameos in the video, which was pointed out in a blog by Jeff Shuey (@jshuey). They are speaking parts, so I’m waiting for my IMBD profile to appear… Oh, and that deal with LinkedIn went through. Maybe you heard about it…

Finally, I thought I’d share some links to videos that were recently posted on the new Collab365 community site, which is really turning out nice, guys. While not all new content, it might be new to you 🙂 And the first link is the recording of Benjamin (you know, the guy from YouTube) and I on stage in Vienna for our keynote. Definitely worth watching.

In fact, if you prefer live sessions, be sure to join Benjamin and I for a repeat performance of our Vienna keynote via webinar on Wednesday, January 25th when we’ll talk about the importance of finding the right culture for enterprise collaboration. You can register here. Hope you can make it!

Christian is the Microsoft GTM Director for AvePoint Inc., and a Microsoft Regional Director and Office Apps & Services MVP based in Silicon Slopes (Lehi), Utah. He hosts the AvePoint Office 365 Hours (#O365hours) series, monthly #CollabTalk TweetJam, the #CollabTalk Podcast, and leads the monthly Microsoft 365 Ask-Me-Anything (#M365AMA) live stream. He is based in Lehi, Utah (Silicon Slopes).