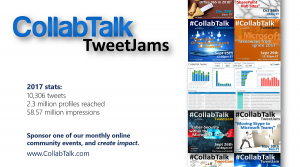 The CollabTalk TweetJam was launched in January 2012 as an efforts to get insights and share experiences beyond the echo chamber of my own company and professional network. Since inception, I have tried to touch on many of the pressing questions of the day, or new technology innovations happening within the Microsoft ecosystem. Of course, many of the topics covered have broader implications than just the Microsoft ecosystem, and we’ve had a number of competing solutions represented at these online events.

For those of you who have participated in my monthly tweetjams, you’ve seen the impact of many of these discussions. What started as 8 to 10 participants has expanded into what we see today, with most tweetjams including anywhere from 30 to 50 experts, MVPs, RDs, and influencers. Each one-hour event includes a short list of questions, but inevitably, the whole hour feels rushed as participants reply to the questions, share experiences, and engage with each other to respond, retweet, and extend the discussion. My original goal was to get differing opinions for my content development activities — but the tweetjams have evolved into something much, much bigger. Most events reach anywhere from 250,000 to 500,000 social profiles, generating 600-800 tweets in that hour, resulting in 3,000,000 to 6,000,000 impressions. In fact, most topics trend nationally on Twitter!

As the impact of these tweetjams has grown, I began offering sponsorships, and am thankful to have tyGraph as my ongoing analytics partner and sponsor, providing their Power BI-based statistics (I had been purchasing reports through another vendors for a couple years). Full sponsors have included AvePoint, Colligo, KanBo, Exclaimer, and of course Microsoft, however the discussions remain neutral and independent. In other words, sponsors want to be associated with certain topics, but the questions asked and discussions that happen are very much neutral and open for everyone to participate.

I pushed out a tweet earlier this month on the combined stats from 2017 (above), all of which have been captured by the tyGraph team, and I thought I’d create a quick post to share those stats and the evolution of the tyGraph reporting. Here are the stats from January 2017 through August 2017: 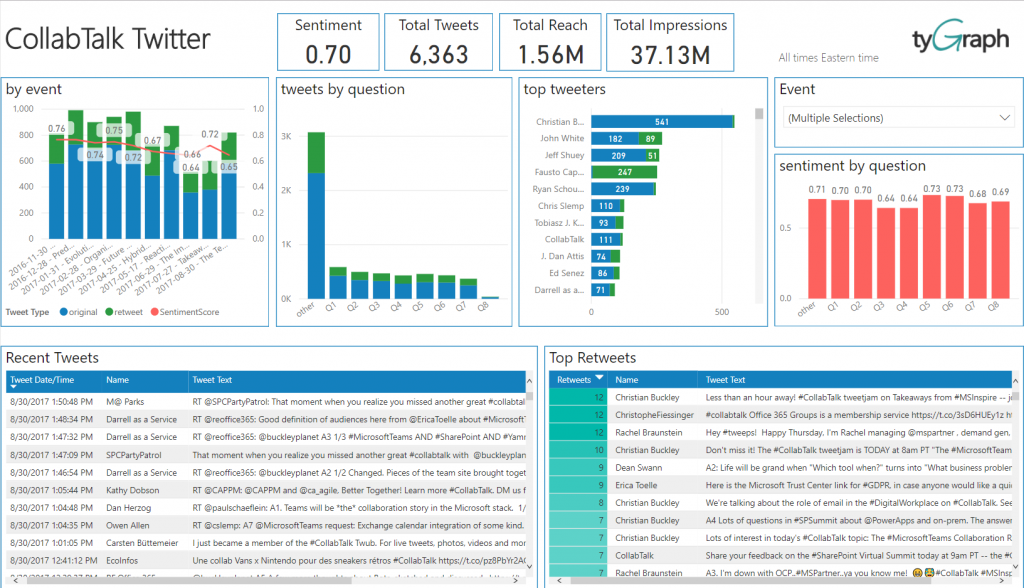 In September, we tried something different around the Microsoft Ignite Conference that took place in Orlando, Florida, hosting 5 tweetjams in 5 days from the community hub area at the conference. It was a tremendous amount of work, but throughout the week, we had a number of experts and Microsoft leadership pass through the area and participate in live stream interviews and answer questions asked within the tweetjams. Each day focused on one of the themes of the conference, with an Ignite Takeaways tweetjam on the final day. Many of our usual participants were in attendance at the conference, making it difficult to participate in an online discussion (while sessions were happening, and the expo hall was open), however we still had a great turnout and participation overall. In support of this special event, tyGraph adjusted their reporting for September, allowing us to track the 5 separate tweetjams in one dashboard. We also enjoyed sponsorship from 2 different Microsoft product teams and three partners. And we also saw a HUGE jump in the average number of profiles reached, exceeding 1 million different profiles. Pretty amazing.

Here are the Ignite tweetjam stats: 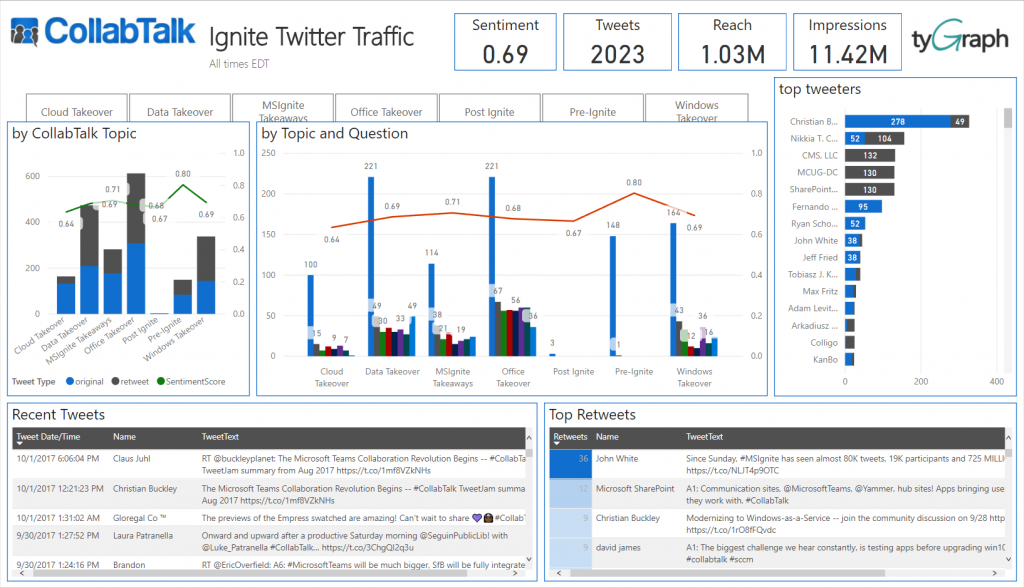 Wrapping up the year, tyGraph made some tweaks to their report and adjustments to their algorithms to ensure that we were removing any fake users or bots from the metrics. They’ve provided this “scrubbing” all along, but were able to automate much of that. With these adjustments, here are the stats from October 2017 through our end-of-year December 2017 tweetjam:

Overall, 2017 was an incredible year for the CollabTalk TweetJam, and we expect to continue to grow in 2018, beginning with our January 30th topic on project management and collaboration. In 2017, the numbers were huge:

Wow. That equates to 3,660,625 impressions per hour, 61,010 impressions per minute, and 1,016 impressions per second. Those are huge numbers! Looking forward to more of this in 2018, and excited to hear from members of the community on the planned topics. If you have suggestions on future topics, or would like information on sponsoring one of the planned topics, please contact me at cbuck at collabtalk dot com (avoiding the screen-scraping bots). And be sure to follow my Twitter profile at @buckleyplanet for the latest news and updates.

Christian is a Microsoft Regional Director and Office Apps & Services MVP, the Founder & CEO of CollabTalk LLC, an independent research and technical marketing services firm based in Salt Lake City, Utah, and fractional-CMO for revealit.io, tyGraph, and Extranet User Manager.