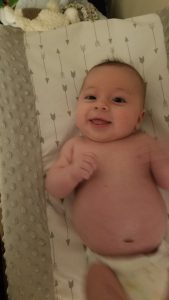 And with a snap of the fingers, another month is gone. October was birthday month, and one step closer to the mid-century mark. A lot of behind-the-scenes activities this past month resulting in not-so-much public content, but never fear — more is on the way! I held the monthly Productivity Tips webinar with Tom Duff (@duffbert), hosted a #CollabTalk TweetJam with a Microsoft Teams focus, spent a few days in Seattle on business, and visited Nashville for the first time to keynote the ARMA Conference. But the real highlight of the month was being able to visit Minneapolis with my wife and see my grandson for the first time. It was a good month.

Another month, another close win by Tom in the ongoing battle that is the Productivity Tips webinar. You can join us for the next tournament (the “November Tussle”) on Nov 26th at 10am Pacific by registering at http://bit.ly/O365tussle

Microsoft’s messaging for Teams is all about creating a “hub” for teamwork. As the focus for last month’s tweetjam, I wanted to know what people thought that meant — and what were the essential components of a hub for teamwork. Not surprisingly, we had a great turnout as Teams is a hot property right now, and the conversation was fast and furious with many useful tips and personal experiences shared. Join us on Nov 27th at 9am Pacific for the next tweetjam as we share takeaways from Microsoft Ignite. 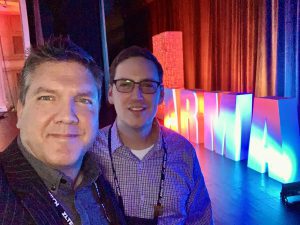 I’ve wanted to visit Nashville for many years, and jumped at the opportunity to provide a keynote address on making impactful cultural change at the ARMA Conference. I enjoyed the event, and was happy to spend time with friend and organizer Nick Inglis, but honestly, I never stepped foot outside of the Gaylord Opryland hotel (which is massive!) except to go to and from airport to hotel. So I’m not sure I can truly claim to have visited the city (and state) on anything but a technicality. No worries — I’ll get back there soon enough. But at least I was able to give one of my all-time favorite talks and once again share the fun story of embarrassing my teenage son. Love that story. If you’ve never heard it, ask me about it next time you see me. Or maybe it’s time for me to record the story for my podcast. Hmmm….

The #MVPbuzzChat interview series marches forward, with several more scheduled for November and December, as well as at least 2 for the #MsftBuzzChat series in which I interview current Microsoft employees and learn more about who they are, and what they do. I used to joke about wanting to become the “Diane Sawyer of the SharePoint community” and here I am, making it happen… 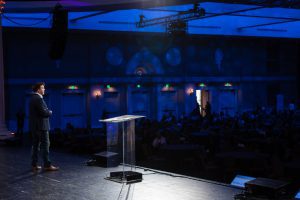 And finally, I wrote this piece for the revealit blog on a topic that has been pestering me for a while: how video marketing breaks everything we’ve learned about permission marketing over the past 20 years. Definitely check it out.

And that’s a wrap for the month of October. November, of course, will be a huge month with Microsoft Ignite happening in Orlando, Florida (3rd year in a row). I have one theater session and a couple podcast recordings scheduled, and will also be lending a hand in the Yammer, Teams, and SharePoint booths within the Microsoft expo area. Lots of announcements forthcoming, and after a year away, I’m excited to head back to Ignite. See you there!

Christian is the Microsoft GTM Director for AvePoint Inc., and a Microsoft Regional Director and Office Apps & Services MVP. He runs the monthly #CollabTalk TweetJam, the #CollabTalk Podcast, and leads the weekly Microsoft 365 Community Office Hours live stream every Monday morning at 8am Pacific. He is based in Lehi, Utah (Silicon Slopes).