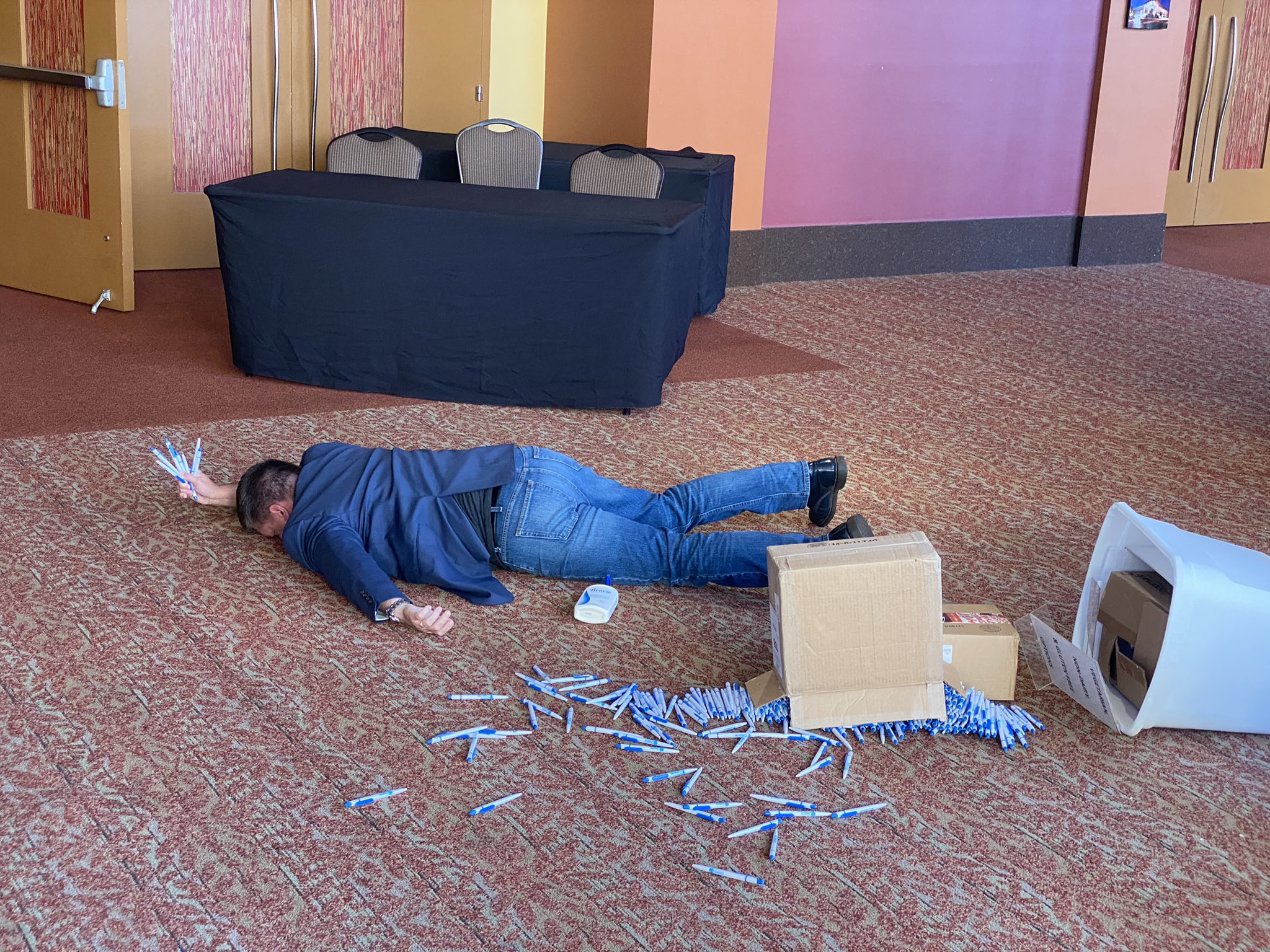 In some ways, September felt the most normal of any month this year since February, due in large part to the dual events of Microsoft Ignite and the North American Collaboration Summit. While the former was held virtually for the first time in its history, the #CollabSummit event was a hybrid event held in Branson, MO as well as virtually using the new Microsoft teams community tenant, which is being piloted. Spending 4 days face-to-face with friends and attendees was just the medicine my extravert personality needed, and I can honestly say it was rejuvenating. Yes, we wore masks when needed, and with additional protocols from the hotel and event staff and area restaurants, we were able to remain safe. Well, except for that incident with the pens…

Of course, a group of us also went bowling, and we’ve received many concerned tweets about our mask-less photos. Before anyone else sends an angry letter, let me just point out that the facility was booked out entirely by the party sponsor (thank you @mlmackie from AvePoint!), it was only a small group of people who bowled, we all had temperatures taken, and we frequently purelled (is that a verb now?) so please calm yourself down.

The week prior to NACS, many of us in the community were glued to our screens for Ignite, with hundreds of sessions, community activities, articles and videos released in a frenzy. Well, it felt like a frenzy, anyway. So much content, and we are all still trying to catch up. Ignite was the focus of the September #CollabTalk TweetJam once again, followed by a great discussion with dual MVP John White (@diverdown1964), and a panel hosted by PixelMill (@pixellmillteam) during which we discussed some of our biggest takeaways from the event. I always get so much more insight and missed detail from these post-event activities, and I so look forward to them.

On a personal note, we said goodbye earlier in the month to my cousin Scott, who passed away after an 18 month battle with colon cancer. Such an amazing man, and one of my favorite cousins. Wish I had been able to hang out with him more often, but was happy to have spent part of an afternoon with him and his family a few weeks ago. We’ll miss you, Scott.

October will continue to be a full-court-press on the content, with many many interviews being recorded for the European SharePoint, Office 365, and Azure Conference which has also been moved online. For the 3rd year in a row, I am helping to organize the community reporters effort, so while I did not submit any sessions this year, if you tune into the broadcast on October 14th and 15th (Central European Standard Time, GMT+2) you will see me quite a bit 🙂

Btw, a few people have asked, and YES, the Productivity Tips webinars will be back in Q4, with Tom and I agreeing to dates for October, November and December, so watch for those dates and related blog posts in the coming weeks!

With events and family stuff, I have a few backlogged articles that should finally come to light in October, including blog posts for Extranet User Manager, Egnyte, and tyGraph. But a few items saw the light of day in September, including one of my two sessions from NACS. My other session (Everything You Need to Know About Microsoft 365 Tasks) was previously uploaded to Slideshare.

I really enjoy getting to catch up with old friends as well as make new acquaintances from the Microsoft MVP and RD community. I have some post-production to wrap up on a couple more interviews, but was able to publish two more interviews this past month:

We continue to evolve the weekly Microsoft community Office Hours, shifting from two 1-hour sessions (morning and evening) to one weekly, 90-minute morning session conducted every Monday at 8am Pacific. Drawing from questions posted to the Office 365 Community group on Facebook, as well as Tech Community and emails sent to OfficeHours@CollabTalk.com, the panel does our best to answer questions from the community while also poking fun at each other. We usually have a lot of fun, and welcome all to participate. We live stream on Facebook, Twitter (Periscope), LinkedIn, and YouTube. If you catch the live broadcast, you can email us questions or post to either FB or LinkedIn.

If you ever miss a #CollabTalk TweetJam, be sure to check out the tyGraph stats in Power BI. If you go to the final tab, you’ll find a complete history of every tweet and retweet sent during the tweetjam (as long as people remembered to use the hashtag). Be sure to check out the video with John White and the recording of the PixelMill panel for additional insights into the announcements made at Ignite.

And finally, some blatant-self promotion, because hey…it’s my blog. One of the highlights here was participating in the Engati podcast and vlog where I talked about common marketing technology and strategy mistakes. It was a great discussion, and for any business that is looking to expand and grow through marketing, it’s worth a listen!

Looking forward to a busy October, with (currently) 5 webinars on the schedule, a couple dozen interviews, and lots n’ lots of content to be written. Good times.