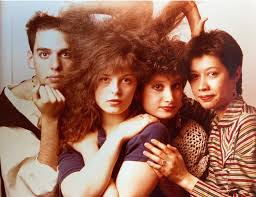 During my freshman year at university, a new dance club opened up on Main Street in Provo, Utah called Plastiques that would play all of the latest and underground new wave, techno, and synth-pop dance music. Several songs off of the eponymous Book of Love album, which debuted that year, were part of the Plastiques regular rotation, and the band quickly became one of my favorites. Formed in Philadelphia in 1983, the band recorded 4 studio albums during their initial run, but found instant fame when they opened for Depeche Mode on back-to-back tours in 1985 and 1986. My wife and I saw then in San Francisco in 1991 while supporting their 3rd album, Candy Carol (one of my all-time favorite concerts). For this week’s Blue Plate Special, I thought I’d share some of my favorite songs.

Overall, this has always been my favorite from the band since I first heard it in that Provo, Utah club.

Tubular Bells, from the album Lullaby (1988)

You’ll recognize the use of the intro from the movie The Exorcist, which is a great club dance track that was usually mixed with other artists to keep the BPM going. On the album, it is blended into the next song, “Pretty Boys and Pretty Girls,” which was their first single off this album.

Probably their most famous single, which has been included in several movies and television programs, and in 2001, reached #1 in the US dance charts when it was remastered as part of their greatest hits compilation.

While their 3rd and 4th studio albums did not perform as well as their first two, there are quite a few great songs on this album. This was the first single from the album, and it received decent rotation on college radio.

Witchcraft, from the album Lullaby (1988)

This one is just fun, with sound effects from the Bewitched tv series. Another great dance song.

The most iconic of their singles, this was always part of my set list when I would DJ in the early and mid-90s.