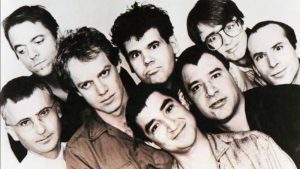 It is difficult to limit my favorite Oingo Boingo songs down to 6 or 7 videos, but this is my attempt to share some of my favorites that, I feel, are representative of their body of work. Formed in Los Angeles in the late 70’s, I first came across the band when some of the local skater kids an my junior high bought their first album in 1981 and brought it to school. My buddy Paul soon after picked up a copy, and I was mesmerized by the mix of ska, rock, and humor in the album. Other than the songs played on the weekly Dr. Demento radio show, I had never heard a mainstream pop / rock band introduce this kind of fun and humor into their music. I was hooked.

By the time So-Lo (1984) and Dead Man’s Party (1985) were released, I was an avid fan and picked up both as soon as they were released. I remember at a youth volleyball game, I offered to play some music in the background, but a girl said “No, not you. You’re going to play Duran Duran or Oingo Boingo, so no.” I took that as a compliment.

Although they disbanded in 1995 after 8 studio albums, you’ve probably heard dozens of film scores by lead singer-turned-composer Danny Elfman. As for the band that brought him to prominence, here are a few of my favorites:

The first and only single from the album, the song was very successful in California, and appears on the Guitar Hero Encore video game.

Grey Matter, from the album Nothing To Fear (1982)

My favorite song from this album, based on the H.G. Wells novel ‘The Island of Dr. Moreau.’ If you’re a fan of the book, there is also a fan-made video that uses scenes from the 1977 movie, which is a hoot. It’s a great example of the complex rhythms and vocals backed by horns and various sound effects to give it that unhinged jungle sound.

Their fifth studio album was another change in musical direction, with more pop sounds and less “craziness” in style and lyrics, and their most commercially successful. This was the 4th single from the album, and became a huge hit in Brazil.

Another song from their first album, this is another great song that showcases their early style, clever lyrics, and use of the horn section to bridge the space between ska and pop.

While Elfman said he later regretted writing the songs for the John Hughes film of the same name, and feels embarrased by the accompanying mucis video, the song was their most commercially successful, and is loved by many. I prefer the extended version.

The 3rd single from their sixth studio album, and was the last to really embody the “classic” Oingo Boingo sound before moving to a more pop / adult contemporary (in my opinion)  style for their next album.