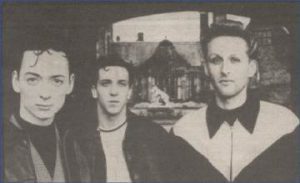 I thought I’d share selections from an underrated band from the 80’s (and 2000’s), The Wild Swans. Formed in 1980 in Liverpool, England, the main driver of the band was lead singer Paul Simpson, who was the keyboardist for Julian Cope‘s post-punk band The Teardrop Explodes. Another big name out of the band was Ian Broudie, who provided guitars and production, and would later go on to perform under the name The Lightning Seeds, which is another artist that I admire. I’m not a fan of the post-punk label because there are so many bands and sub-genres that people try to squeeze into that label. To me, they are jangly-pop new wave band with a bright and melodic guitar style and melancholic vocals. I remember hearing their single’ Young Manhood’ as part of a Sire Records compilation, and heard them several times on Live 105 radio out of San Francisco into the early 1990’s. The band disbanded and reformed with various lineups 3 times — briefly in 1982, again in 1990, and then finally in 2011. During this time, the band produced 3 studio albums, 2 EPs, 1 live album, and 3 compilation albums which contain many demos, b-sides, and live versions.

If you like their sound, I also recommend their 1982 John Peel recordings (released in 1986). Here are some of my favorites:

Young Manhood, from the album Bringing Home The Ashes (1988)

This was the first song I heard from the band, off of the Sire Records compilation Just Say Yes in 1987, which hooked me. While the band had been around for a few years (off and on), it became the first single from their debut album in 1988.

In Secret, from the album The Coldest Winter For A Hundred Years (2011)

After breaking up in 1990 following their second studio album, Simpson reformed in 2009 with a revised lineup and produced a new studio album, releasing two singles before disbanding one last time. Overall, this is an excellent album, with more complex songs and lyrics than their previous releases, and is definitely a must-listen.

Sea of Tranquility, from the album Space Flower (1990)

As the final song on their second studio album, this is one if my absolute favorites on the album — and a great tune for long roadtrips. This melancholic and melodic song slowly builds and runs for almost 11 minutes with driving drums and heavy reverb on the simple lyrics. Love it.

Bitterness, from the album Bringing Home The Ashes (1988)

A great song from their first incarnation. Musically, one of the closest to the “post-punk” genre that is often assigned to them, but still with a positive spin and pop sensibility.

Another slow, melancholic song from their second studio album with an almost-pause at the 3:30 mark, followed by a slowly building drum crescendo and orchestral explosion. In some ways, it reminds me of the song Atomic Lullaby by The Blow Monkeys.