March is now a wrap, and as promised — things are getting hectic. In-person events are starting back up, which I am excited to see…although I am bummed to be missing a couple big events in the next two months. I will not be traveling to Las Vegas as I had hoped for the M365 Collaboration Summit as there is just too much going on, and I will not be at EduCon Seattle (formerly SPFest) in May as it overlaps the IT Nation Evolve event that I’ll be attending in Dallas (and missing again for their Dallas event, when I’ll be in Denver). However, I’m planning to attend the EduCon in Chicago this fall, and will be at both NACS and ESPC, so hope to see all of my community friends later this year! 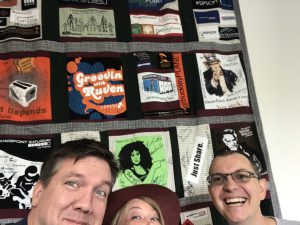 The Microsoft MVP Summit happened this past week….virtually, again. I was not able to attend many live sessions, but am slowly going back through the content. It was good to see some many tweets and shared photos from past events, such as this one with me, Tasha and Tom in front of the #ShareQuilt in Building 34, which Microsoft CVP Jeff Teper tweeted out early in the week. For those who don’t know the background, my mother-in-law and I created this piece in the Microsoft art collection, made out of t-shirts and branded polos from various events (mostly SharePoint Saturdays). A number of MVPs and experts who frequented these events signed their names all over it. It’s double-sided, btw, in case you’re ever in the lower lobby of 34 and want to do a FourSquare (Swarm) check-in next to it.

The RD (Microsoft Regional Director) Summit is this week, and I have a couple days in the schedule carved out to participate as much as possible. We’ll see how that works out.

In April, I will be visiting Arlington, Virginia again for another team event at the AvePoint regional office, and then I am headed to Irvine, California for the SMB Techfest event on April 14th. If you’re attending that event, please let me know! I may be at another channel-related event in April. Not sure yet. Things are in flux, but I am making myself available to attend more of these events as we expand our channel efforts. As mentioned above, in early May I’ll be in Dallas for a week for the IT Nation Evolve event, and will be staying a couple extra days to visit friends in the area, with my wife flying down to join me. For those who know, this is a rarity, as my wife hates travel. Looking forward to that trip and exploring the Dallas area, which is a possible relocation destination for us in the next year or two.

One other areas where I’ve been spending a good amount of time is with the AvePoint Community Champions. We’re making some big plans for this year, and you should start to see more content coming from this group of experts, so be sure to watch my social channels — as well as AvePoint’s!

Here is the content that I authored in March, and I have a few more announcements at the bottom, so read on: 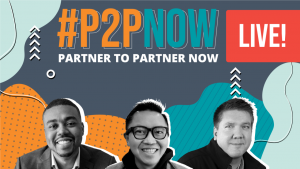 With the weekly #P2Pnow series of videos and short blog posts on the AvePoint blog, we’ve expanded our channel content with the addition of a Friday at noon Eastern live show using the LinkedIn Live platform (similar to Clubhouse). It’s all audio, with myself, Sam Valme, and Dux Raymond Sy discussing that week’s channel topic under the banner of #P2Pnow Live! If you’re interested in any of the Thursday topics, come join the Friday show on LinkedIn, where you can ask questions and interact with us. I also led the launch of a new “Grow Your Business with AvePoint” webinar series, with new content every 2 weeks. We’re targeting MSPs for this series, but all partners are welcome.

For the March #CollabTalk tweetJam, we discussed the complexities of employee wellbeing, and how organizations are dealing with “the great resignation.” MVP Daniel Glenn was kind enough to join me for a 1:1 interview following the tweetjam and share his takeaways. Also linked here is my interview with MVP Jill Hannemann following last month’s tweetjam on the topic of frontline workers. In April, we’ll be discussing the topic of ransomware, and how to protect yourself. 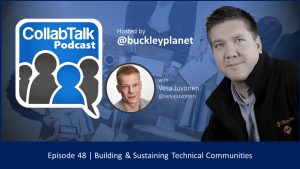 Between my #O365hours series on the AvePoint blog, my weekly #CollabTalk series every Friday, and the weekly #MVPbuzzChat interviews every Monday, I found the time to sneak in an interview with Jeremy Wood. If you’ve ever wondered about my professional background, be sure to check that out.

And if you’re interested in being interviewed, please let me know. I am always looking for MVPs and RDs (or even MVP reConnects) for the #MVPbuzzChat series, and anyone with an interesting story for the #CollabTalk Podcast. Let me know. 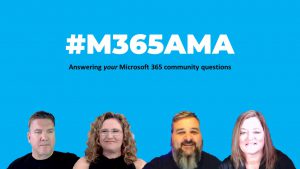 Ask Me Anything Panel Discussions

There’s been a lot of blue on my blog this past month. If you’ve been following the #M365AMA series, you’ve probably noticed that the artwork changes based on who joined me for that recorded segment. More recordings being scheduled AS WELL AS a return to our 90-minute live stream format. All of us miss the fun of those gatherings, so look for a return. We have fun, and we hope to have some live interaction from you!

Yes, I actually wrote a couple other blog posts. While most of my content these days is focused on video, I do occasionally have a few minutes to jot down ideas in written form. Maybe I’ll do more of that in April… 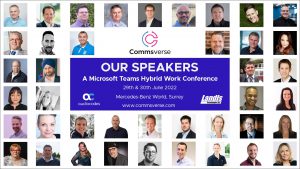 Coming up next… In June I’ll be in London to speak at Commsverse (June 29+30), with two sessions on Teams and team-building. This will be my first international trip since Prague in December 2019, so I am really excited to be seeing friends, partners and customers at this event. I’m planning to be in region for a couple weeks, and may be making my way over to both France and Germany to spend some time with my AvePoint colleagues in those regions.

The other major activity is my April 14th webinar with my good friend and fellow MVP Richard Harbridge at 2toLead. Join us at 11am EST for The Biggest Microsoft 365 Management Mistakes (and how to solve them). As linked above, I provided a short preview on the topic, which you can find on 2toLead’s YouTube page. Should be a fun and informative topic, so be sure to register!